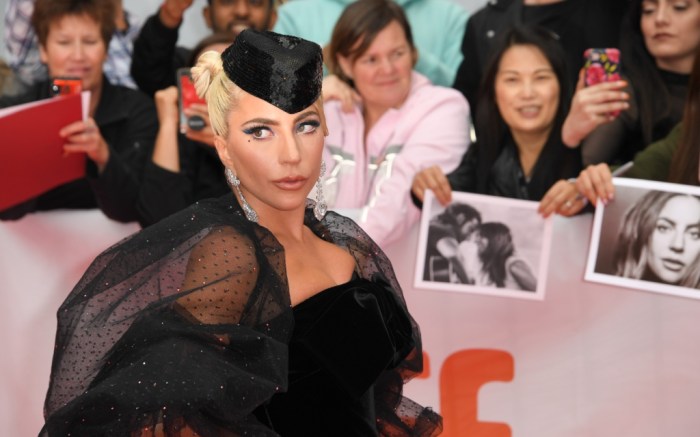 Lady Gaga has been making major waves with her style during the press circuit for her film “A Star Is Born,” stepping out in stunning couture gowns from the likes of Ralph & Russo and Valentino.

And last night at the Toronto International Film Festival, the pop star-slash-actress showed off her most head-turning look so far.

Alongside a dapper Bradley Cooper, who sported a brown suit and matching shoes, Mother Monster went with a black velvet strapless column gown courtesy of Giorgio Armani Privé’s fall ’18 haute couture collection, which debuted on the runway in Paris in July.

But what really stood out was her black sequined hat and the Swarovski crystal-embellished sleeves that doubled as a veil. Gaga’s ensemble for the night wasn’t complete without her statement-making “Garden of Kalahari” diamond pendant Chopard earrings.

Her shoes remained hidden — but we like to think she opted for black shoes à la Gianvito Rossi suede heels, which she rocked for the film’s press conference earlier in the day.

Click through the gallery to see more of Lady Gaga’s wildest shoe moments.

Lady Gaga Is Our Orange Crush In a Sexy Coat, Fishnets and Sky-High Platform Heels