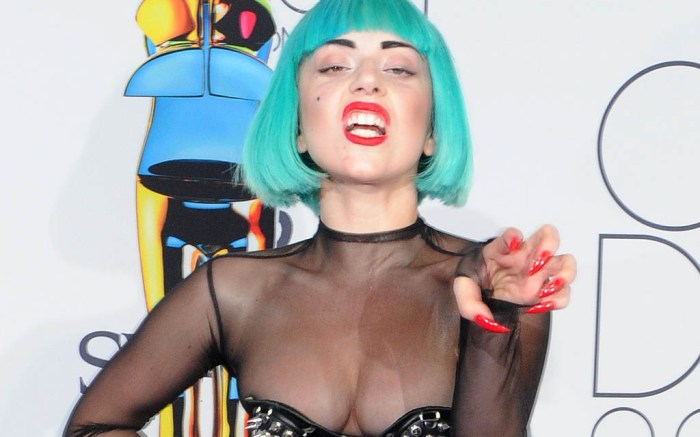 Since breaking onto the scene in 2008, Lady Gaga has pushed the boundaries of fashion to new extremes — quite literally.

The “Born This Way” singer, who turns 32 today, is famous for rocking gravity-defying heels, including one pair of platform shoes (worn to the 2011 CFDA Awards) that towered a dizzying 24 inches off the ground. Proving her devotion to high heels, Gaga has even been spotted wearing her signature stilettos in the most unlikely of places, from the beach to the hiking trail.

Many of her most memorable and avant-garde shoes are one-of-a-kind custom creations dreamed up in collaboration with designers and artists including Stuart Weitzman, Giuseppe Zanotti, Alexander McQueen, Kobi Levi and Rem D. Koolhaas. In honor of her birthday, we’ve rounded up some of Gaga’s wildest, most jaw-dropping pairs.

Who could forget the singer’s shocking and controversial meat ensemble, unveiled at the 2010 MTV Video Music Awards? Designed by Franc Fernandez, the look featured an asymmetric minidress and wedge platform shoes made of raw flank steak trimmed with butcher’s twine. While the outlandish outfit was publicly condemned by organizations such as PETA and the Vegetarian Society, it remains one of the most talked-about fashion moments of all time.

Mother Monster had fans gawking in 2014 when she was photographed strolling the streets of New York dressed in a gingham dress and white platform shoes perched atop 10-inch spike heels. The shoes were designed by exotic footwear brand Pleaser, a longtime favorite of the singer’s.

Arriving at London’s Heathrow Airport in 2010, Gaga wore a pair of cream leather sculptural booties that seemed to defy gravity with their unusual heel-less design. She went on to wear quite a few such styles over the the years, many created for her by Japanese artist and designer Noritaka Tatehana.

At the 2013 Glamour Women of the Year Awards, the New York-born star went for a costumey vibe, pairing her Thom Browne jacket-and-skirt look with a ghostly powdered face, dramatic blonde wig and gloves. She topped off her eccentric look with pearl-embellished 10-inch platforms by A-morir.