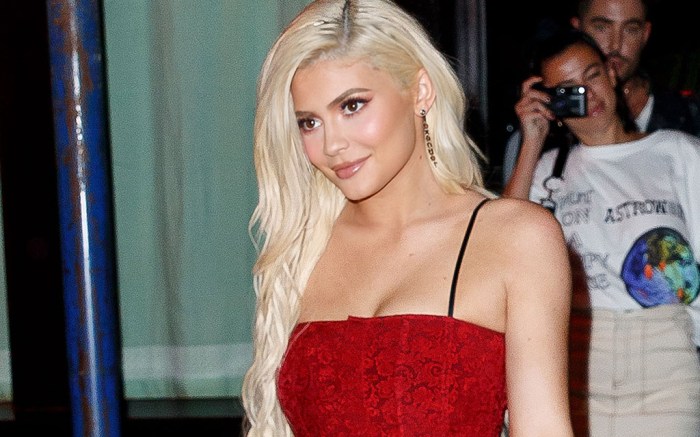 Kylie Jenner has made it to New York ahead of tonight’s MTV Video Music Awards. The 21-year-old is said to be attending with boyfriend Travis Scott, and she’s making the most of her time in the city. On Sunday night, Jenner was spotted out at New York hot spot Carbone wearing an eye-catching head-to-toe ensemble by Alexander Wang.

Debuting long platinum blond locks, the “Keeping Up With the Kardashians” star opted for a red mini body-con dress by the designer along with the brand’s spring ’19 accessories. Jenner wore embellished stilettos by Alexander Wang. Featuring ankle straps and a d’Orsay design, the heels were covered in metal rings and a metal toe cap. She also carried the luxury label’s crystal-encrusted Bodega bag to top off her look.

Tonight, Jenner will be sure to wow on the red carpet in a designer ensemble. In years past, the makeup mogul has walked the MTV VMAs red carpet wearing Balmain and Alexandre Vauthier.

Be sure to tune into the awards show at 8 p.m. EST on MTV and stay tuned for more coverage.