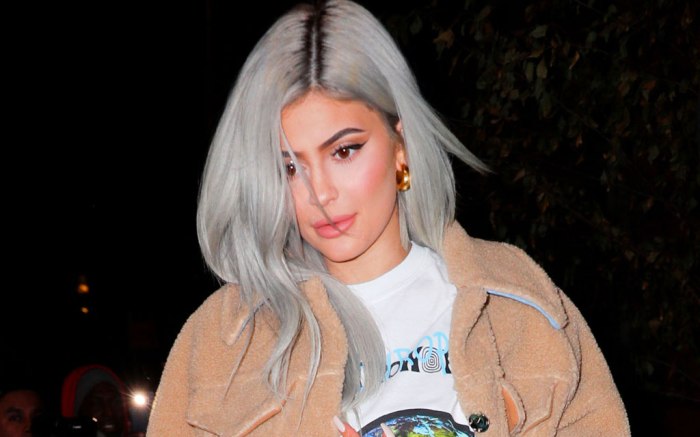 The Kylie Cosmetics mogul wore a cropped “Astroworld” T-shirt — a piece of merch from Scott’s tour — with a pair of skintight red pants with a sparkly finish. She braved the New York cold in a cropped Off-White faux shearling jacket, which she wore unbuttoned over her tee.

The 21-year-old held onto a leopard-print Dior saddle bag, completing her stylish look with a pair of white sneakers.

While Jenner is an Adidas ambassador, she opted for a pair of Iro Paris kicks instead. The luxurious sneakers have an upper made of mesh and calfskin, with a rubber sole and a flat profile. The shoes adhere to the “ugly” sneaker trend that’s been popular throughout 2018.

The “Keeping Up With the Kardashians” star took to Instagram to share a shot of her stylish look, posing in an oversize armchair prior to Scott’s show.

when ur hubby is performing at madison square garden tonight 👀

“The look ya give when ur hubby is performing at madison square garden tonight ,” she captioned the shot, adding the eye emoji.

For his part, Scott shared an image of the duo’s infant daughter, Stormi, clapping along excitedly to his tunes backstage at MSG.

Click through the gallery to see Kylie Jenner’s best street style looks of 2018.