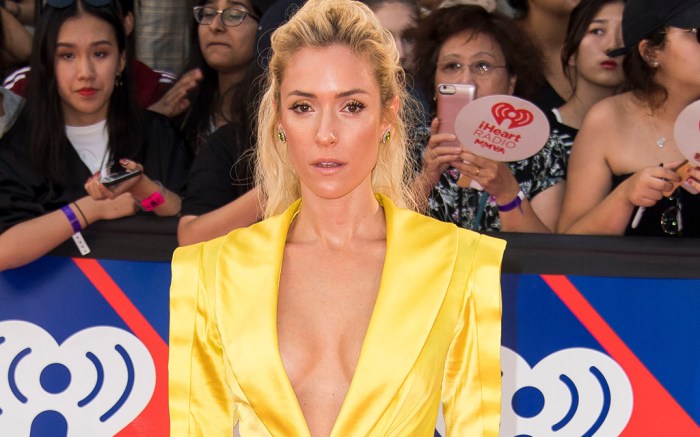 Kristin Cavallari predicted that she was going to expose more than she intended when she arrived on Sunday at the iHeartRadio Much Music Video Awards in Toronto.

“I’m literally two seconds away from a nip slip!” she told her fans on Instagram Stories. “It better not happen. I’m gonna ask for tape.”

Well, it did happen. So much for the tape. The Chinese Laundry collaborator hit the red carpet in a sensual yellow Nicolas Jebran wrap dress that had a plunging neckline cut down to the navel — leaving a generous amount of cleavage on show. She completed the racy number with metallic sandals.

Unfortunately, when she turned to the side while posing for pictures, Cavallari suffered a wardrobe malfunction when her chest maneuvered in the wrong direction.

Still, the E! TV personality looked confident and chic as she made her way inside the venue for the award ceremony, where she took the stage alongside JWoww to present an award.

Cavallari launched her shoe line with Chinese Laundry in 2012.

See How These Celebs Avoided Wardrobe Malfunctions on the Red Carpet.

How Much Is Kristin Cavallari Worth? A Breakdown of the TV Star’s Wealth