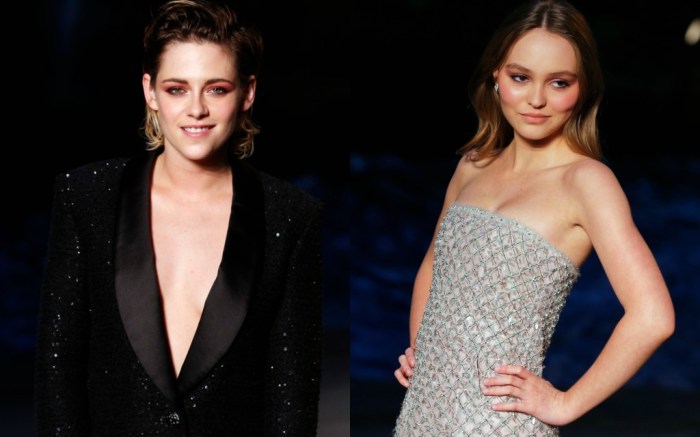 Two of Chanel’s biggest brand ambassadors, Kristen Stewart and Lily-Rose Depp, stepped out in Paris today to show their support for Karl Lagerfeld’s resort ’19 collection, shown at within the Grand Palais.

The “Twilight” star, who has modeled for numerous Chanel campaigns since in 2013, wowed in a plunging black sparkly blazer with matching short-shorts and black lacy ankle booties by Alice McCall featuring an ankle strap.

Meanwhile, the 18-year-old daughter of Johnny Depp and Vanessa Paradis — who was named a brand ambassador and the face of the label’s Pearl eyewear collection in 2015 — posed in a slinky strapless blush-colored minidress embellished with silver detail teamed with matching silver metallic sandals.

The set of Chanel’s resort show was outrageous, as per usual, featuring an enormous boat decorated with a string of lights named “La Pausa,” after Coco Chanel’s villa in Roquebrune-Cap-Martin, France.

For more of Kristen Stewart’s style through the years, check out the gallery.

Lily-Rose Depp Wears Chanel Sneakers, Plus More Celebs Out and About In Cannes