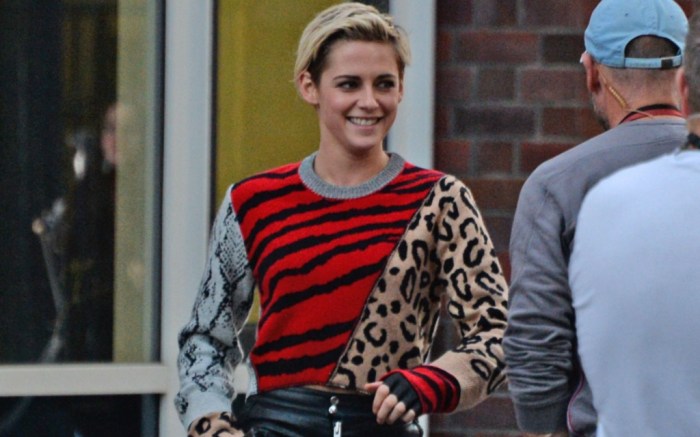 Kristen Stewart has been busy filming the upcoming “Charlie’s Angels” reboot in Germany — and yesterday, photographers captured the star running through the streets of Hamburg shooting an action scene in an attention-grabbing biker-inspired outfit.

The 28-year-old “Twilight” alum was snapped sprinting with a gun while sporting a pair of zipper-embellished black leather pants teamed with a bold, eye-catching crewneck sweater featuring snakeskin and leopard prints as well as a red and black zebra design.

The new “Charlie’s Angels,” which has been described as a “woke” version of the original, will see Stewart act alongside Ella Balinska and Naomi Scott. “Pitch Perfect” actress and director Elizabeth Banks is directing Stewart and also co-wrote the new script. “There’s a whole network of Angels, it’s like women across the entire globe are connected and helping each other,” Stewart recently revealed about the remake.

For more of Kristen Stewart and her personal style, check out the gallery.