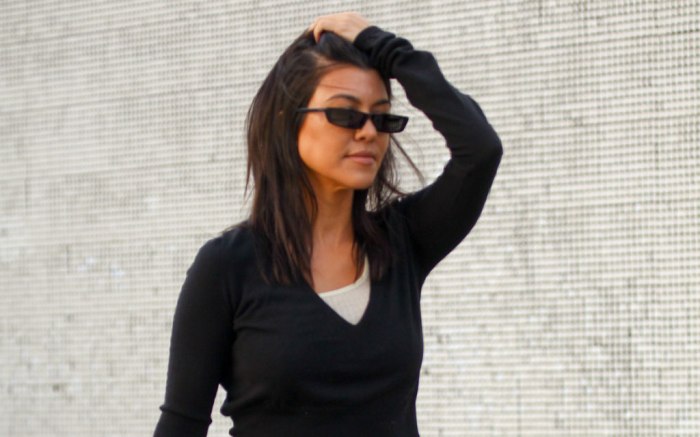 Kourtney Kardashian went for an on-trend look as she stepped out for shopping and lunch with rumored boyfriend Luka Sabbat yesterday.

For footwear, the “Keeping Up With the Kardashians” star chose a pair of python Yeezy Season 5 boots. Snakeskin is one of this fall’s biggest boot trends, as a slew of other stars — including Emily Ratajkowski, Priyanka Chopra and Bella Hadid — have sported similar styles in recent weeks.

Kardashian’s decision to step out in Yeezy is unsurprising. She frequently sports styles from the label; her brother-in-law, Kanye West, is the brand’s creative director. The boots the mom of three picked featured a stiletto heel and a pointed toe.

Meanwhile, Sabbat opted for a more dressed-down look, wearing a gray crewneck sweatshirt and matching sweatpants. On his feet, he wore Nike Air Force 1s in a white colorway, rolling up his sweats to show off a pair of sky-blue crew socks underneath. The 20-year-old model accessorized with a logo’d Louis Vuitton scarf, a white cross-body bag and a “Seinfeld” dad hat.