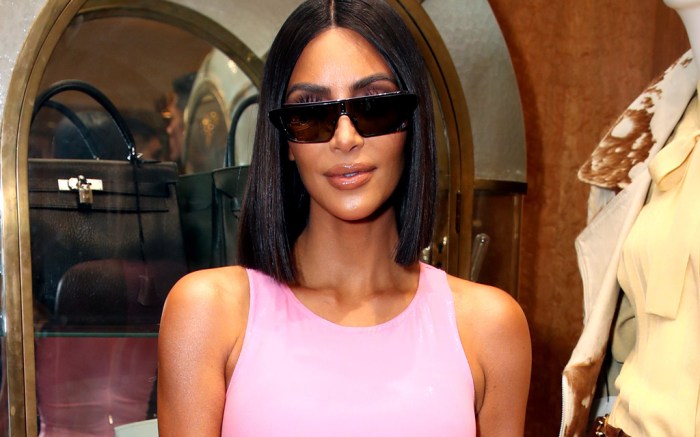 It’s the best of both sartorial worlds for Kim Kardashian.

The reality star took on two trends — daring latex and trendy PVC — at a party in Beverly Hills celebrating the 25th anniversary of luxury vintage boutique What Goes Around Comes Around with co-host Christie’s, where she looked every bit like Barbie once again. (Recall the Kardashian-Jenner clan’s getup at sister Kylie Jenner’s 21st birthday bash.)

On top, Kardashian sported a vintage Versace number, which tightly hugged her every curve and drew the eyes to her incredibly tiny waist. The high-cut length gave way to tanned legs, her feet standing pretty on clear pumps from husband Kanye West’s Yeezy collection. The adventurous blend of latex and PVC offered a modern-day spin on her outfit’s ’90s-era silhouettes.

But, wait, is that fast food on the red carpet? Kardashian’s clutch could’ve totally fooled us. Set on a hard shell, the Judith Leiber Couture bag came in a fun French fries shape with a rainbow pattern in the front. She completed her look with Matrix-style sunglasses.

Kardashian has made some serious style statements lately, from the neon green dress she wore at 2 Chainz’s wedding to the body-skimming metallic piece that complemented her fluorescent hairdo in Miami last week.

Click through the gallery to see more of Kim Kardashian’s most body-confident styles over the years.