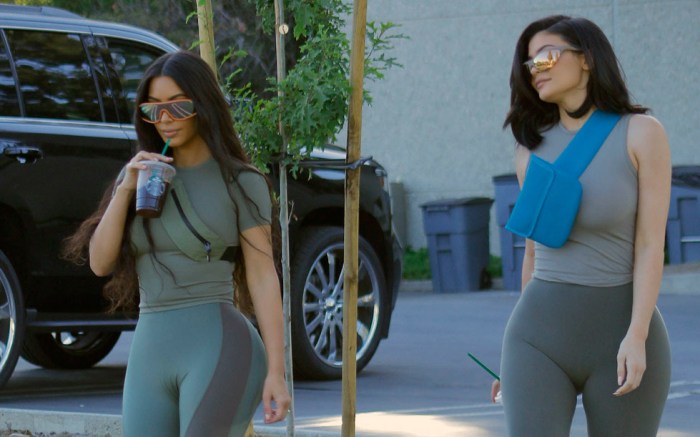 Kim Kardashian and Kylie Jenner took to the town yesterday in a look that had the internet do a double-take.

The siblings stepped out for a coffee run in Calabasas, Calif., wearing matching skintight leggings that flaunted their curves as well as Yeezy stiletto sock boots in respective hues of cerulean and onyx. (The brand, founded by Kardashian’s husband, Kanye West, offers similar styles.)

While Kardashian completed her outfit with reflective oversized sunnies and a body-hugging T-shirt with a zipper detail across her décolletage, Jenner opted for a sleeveless tank, topping off the ensemble with similar mirrorlike sunglasses and a crossbody bag strapped at her chest.

Both reality stars have recently made nonsartorial headlines, with Kardashian, 37, throwing a star-studded birthday party for West, who turned 41 on June 8. The rap star debuted his latest collaborative project, “Kids See Ghosts,” just a week following the release of his confessional album, “Ye.” This followed shortly after the TV personality’s high-profile visit to the White House, meeting with President Donald Trump to request the pardon of 62-year-old nonviolent drug offender Alice Johnson.

Jenner, on the other hand, invited speculation among fans as to why she deleted all photos on Instagram that featured 4-month-old daughter Stormi Webster’s face. In a selfie shared yesterday with Stormi cropped out of the image, the makeup mogul replied in a comment, “Yeah I cut my baby out. I’m not sharing photos of my girl right now.”

Click through the gallery to see more photos of the Kardashian-Jenner clan sporting Yeezy.