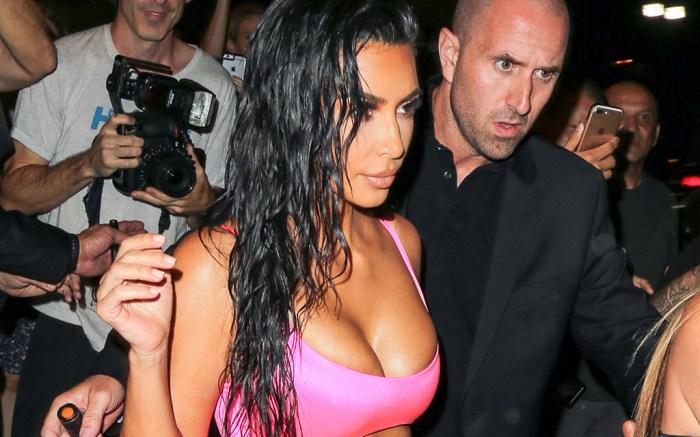 So naturally for Kylie Jenner’s milestone 21st, the famous family got together to throw an epic birthday bash appropriate for the almost-billionaire (and youngest member of the clan, we might add).

The group kicked off the festivities at celeb-favorite haunt Craig’s in West Hollywood, Calif., where the birthday girl was photographed arriving in a hot-pink peak-shouldered dress by Peter Dundas and matching Olgana Paris wrap-around pumps.

Another member pretty in pink was Kim Kardashian, who looked just as much as a Barbie doll in her ab-baring bodycon dress and ’90s-inspired sandals.

Jenner’s sisters kept the rest of their ensembles on-theme, with Kourtney in a glittering purple number, Khloe in a shimmering three-piece suit and Kendall in the tiniest of strapless LBDs. (The supermodel even brought back Prada’s iconic flame sandals, which first hit the runway at the luxury brand’s spring ’12 show and are now making a comeback.)

Jenner’s parents, Caitlyn Jenner and Kris Jenner, were also in attendance, along with her boyfriend, Travis Scott, as well as Kanye West, Ben Simmons and Scott Disick. (Baby Stormi was surely asleep at home.)

Following the dinner, the party made its way to swanky nightclub Delilah, where Kylie was all dolled up in a tightly fitted jewel-encrusted romper and pink pumps in a lighter shade by Christian Louboutin. She also accessorized with a Swarovski-adorned orb-shaped bag by Marzook.

It was certainly a night to remember, with Kylie capping off the celebration with an Instagram post of two broken Barbies that likely represented how she felt at evening’s end.

Here’s How Much Kylie Jenner Is Really Worth