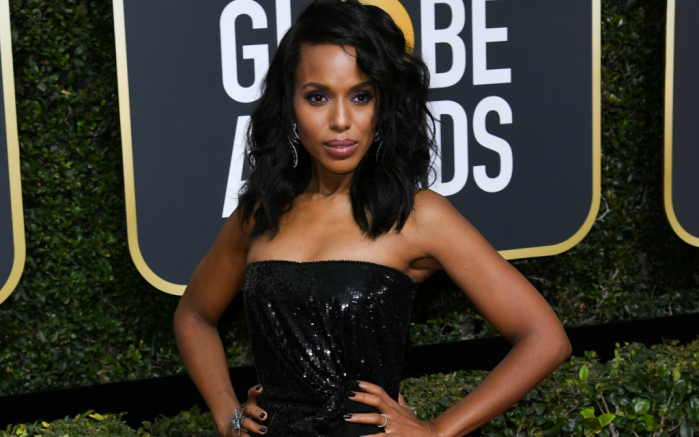 “Confirmation” star Kerry Washington hit the red carpet at the 75th Annual Golden Globe Awards in a style not usually worn at such an event — zip-up, sheer “Net” booties. It was an edgy, unconventional choice that set her apart. The pointy-toe, stiletto style, bedazzled in crystals and pearls, was the perfect complement to her high-slit black gown.

Expressing solidarity with the women who have spoken out against sexual harassment in Hollywood as part of the #MeToo and #TimesUp movements by wearing all black, the 40-year-old actress was in attendance for her nomination, Best Actress In A Mini-series or Motion Picture for TV for her work as Anita Hill in “Confirmation.”

It was Washington’s second Golden Globe nod. The mother-of-two was previously nominated for her work in “Scandal” in 2014. She also received a Primetime Emmy Award nomination for her role in “Confirmation.” The actress had previously confessed to FN that she’s had a shoe obsession for some time now.

“When I was a little girl, I begged my mother to take flamenco lessons at the Boys and Girls Club. And looking back, mostly I wanted to take flamenco because you got to wear these little red high heels, and I was, like, 10. So my love affair with shoes started a long time ago,” said Washington.