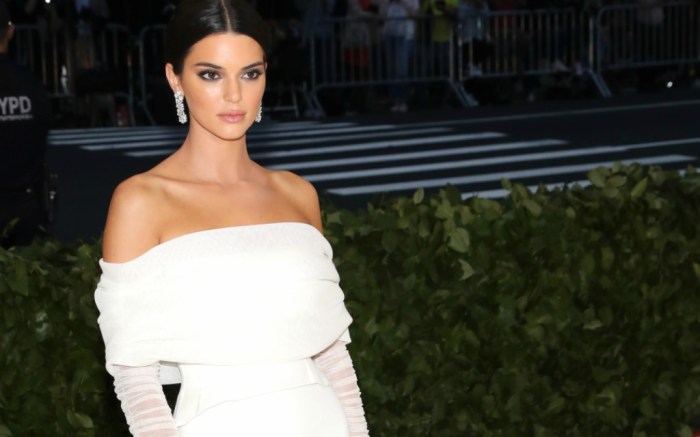 Kendall Jenner made major waves Monday night when she hit the 2018 Met Gala red carpet wearing head-to-toe Off-White courtesy of close pal and designer Virgil Abloh, who escorted her to the glamorous event.

But Jenner has found herself facing a torrent of comment on social media after a video of the supermodel gently pushing a security guard aside went viral. The catwalk queen wanted some extra space to pose for the cameras.

While some social media users are roasting the Adidas ambassador — who donned slinky Jimmy Choo x Off-White Jane power sandals for the occasion — others have come to her aid, defending the move.

Mood: @KendallJenner pushing a security guard out the way so she could get the perfect photograph, only #MetGala things 📸 pic.twitter.com/Kvtb2wsSPn

One Twitter user seemed to support the model when they shared the short clip and simply wrote: “Mood: @KendallJenner pushing a security guard out the way so she could get the perfect photograph.”

Meanwhile, @DaveA_33 Tweeted,“Hey @KendallJenner, this guy was just doing his job, and yet you thought it was ok to push him out of the way so you could take a photo? Get over yourself!”

@MizzSamz agreed, Tweeting, “Kendall Jenner shows up to the #MetGala in the most bland toilet paper outfit and had the nerve to push one of the  handlers out of the way who was just doing his job on the carpet #Rude.”

Here is the moment Kendall Jenner was caught pushing away a security guard as he invaded her photo at Met Gala (Photos/Video) https://t.co/YW092CzkNJ pic.twitter.com/FU7Zfv0XMY

Another Twitter use came to Jenner’s defense, writing “Push?! Really people?! Stop stirring the pot and making something out of nothing,” before adding, “@KendallJenner didn’t shove or push, it was literally a light tap…dramatic people.”

Push?! Really people?! Stop stirring the pot & making something out of nothing! @KendallJenner didn't shove or push, it was literally a light tap…dramatic people 🙄 pic.twitter.com/fm9hvUKr2O

For more of Kendall Jenner’s head-turning style, check out the gallery.

Rihanna, Cardi B and Kendall Jenner Keep the Drama Going at the Met Gala After-Party