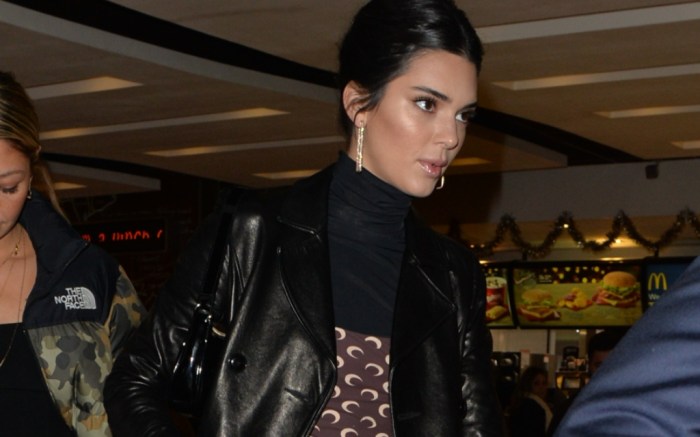 After leaving little to the imagination in a sheer gold Julien Macdonald gown at the 2018 British Fashion Awards, Kendall Jenner was spotted grabbing some fast food from McDonald’s on Oxford Street in London on Monday night.

The 23-year-old supermodel, who was accompanied by a friend, was dressed in an eye-catching look for the late-night food run. She wore a brown and black moon-print jersey top from French fashion designer Marine Serre with a long black leather double-breasted trench coat from Frame over the top. High-rise jeans and two-toned boots completed her ensemble.

The “Keeping Up With the Kardashians” star chose a pair of leather booties with a mostly black upper except for a beige toe with a pointy square shape. The sleek style, which featured an architectural heel, seamlessly pulled things together.

Jenner expertly accessorized her head-turning outfit by adding her favorite black patent leather By Far shoulder bag (a design that was inspired by Rachel Green from the hit sitcom “Friends”) and oversized square earrings.

For more of Kendall Jenner’s street style, check out the gallery.