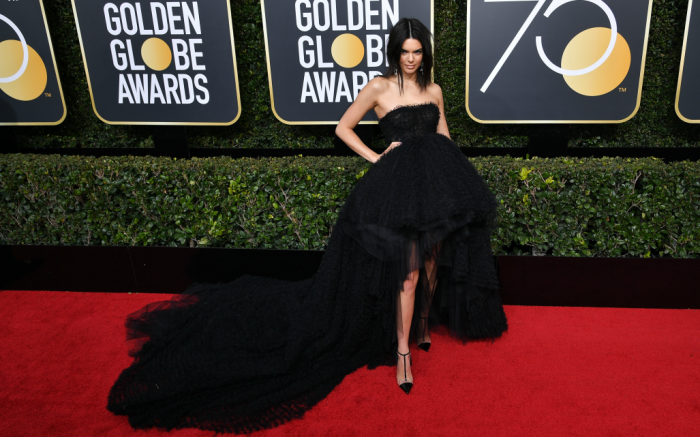 Amid the buzz surrounding the Golden Globes’ unofficial all-black dress code for the Time’s Up initiative to raise awareness for sexual assault, harassment and inequality, one of the more cursory discussions among stylists has been how to stand out in a sea of all-black. It has been just one of the many challenges in dressing for the event, along with how to accessorize with shoes and jewelry, and how to strike the right balance between glamorous and respectful of the movement’s message.

But Kendall Jenner proved that it’s possible to do all of those things — and tastefully. The model made a grand entrance Sunday night on the Globes red carpet wearing a frothy tulle gown by Giambattista Valli from the designer’s Fall 2017 couture collection. Like many of the looks in the collection, the ballgown featured a long, dramatic train and a shorter hemline in the front, which allowed Jenner to fully show off the pair of minimal but elegant pointy-toed T-strap pumps from Christian Louboutin. The look was both statement-making as a full-length look, with its layers of tulle, and more specifically in the shoes, as most of the night’s footwear was obscured by long black gowns.

Jenner’s red carpet look was both glamorous and appropriate for the evening, and in spite of a few Twitter users joking that Jenner was nominated for her disastrous Pepsi commercial this year, the model is sending a sartorial message that she is not tone-deaf to current events.