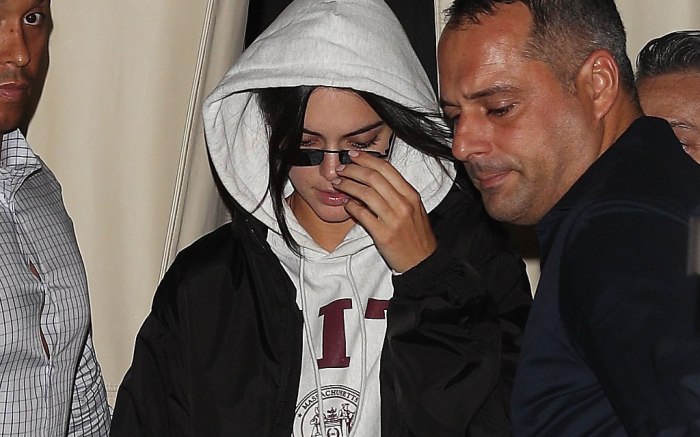 New York Fashion Week will soon be over, but Kendall Jenner has already left the bustling city in favor for its equally fashionable French counterpart.

The reality star-slash-model was spotted arriving at Paris’ Charles de Gaulle airport, where she expertly ducked paparazzi in — no pun intended — duck boots.

Jenner, who shielded her face with one hand, attempted to keep a low profile in a hoodie paired with the weatherproof boots, which came with a lace-up style on a charcoal-hued base. She completed her casual look with black sweatpants and ultraskinny sunnies from her Kendall + Kylie Eyewear brand.

The 22-year-old’s appearance comes shortly after she spent the weekend sitting front row at NYFW but not walking the runways themselves — a rarity for the catwalk staple, who was last year’s highest-paid model in the industry.

In an interview with W magazine following Saturday’s Longchamp show, Jenner opened up about her anxiety and subsequent panic attacks during Fashion Week. “I try to keep myself cool,” she shared. “I go in and out of having freak-outs, so I just have to chill out and be by myself. Yesterday, I took a bath because I was really stressing out. I lit some candles, and yeah.”

Click through the gallery to see more of Kendall Jenner’s street-style looks.

Kendall Jenner Is Red Hot in $1,100 Prada Flame Heels; Get 3 Lookalikes For Less