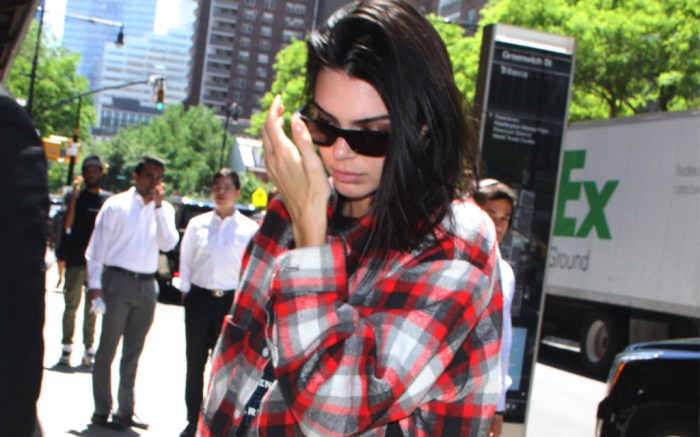 Say what you will about Kendall Jenner, but the reality TV star-slash-model has become a street-style icon in her own right.

From casual menswear suits to comfy sweatpants, the 22-year-old has the ability to upgrade almost any simple ensemble to a high-fashion level — an observance that can be made from her latest look.

Jenner was out and about yesterday in New York clad in a tomboy-chic outfit composed of a long-sleeve plaid flannel shirt, frayed-hem midwash denim shorts and classic square-framed sunnies. But the hero item happened to be her sneakers: the Adidas Yeezy Wave Runner 700, designed by brother-in-law Kanye West. They first debuted during the rapper-slash-designer’s season 5 fashion show in 2017 and come in a multi-solid gray upper, chalk white sole and black detailing throughout the body.

The Adidas Yeezy appearance marked Jenner’s latest take on the dad shoe, which is often characterized by its chunky — even “ugly” — retro appearance. Here, the Adidas brand ambassador has never looked more off-duty in one iteration of a trend that she has worn on several occasions, from her arrivals at the Los Angeles International Airport to Revolve’s Coachella party in April.

Click through the gallery to see more of Kendall Jenner’s best street-style looks.