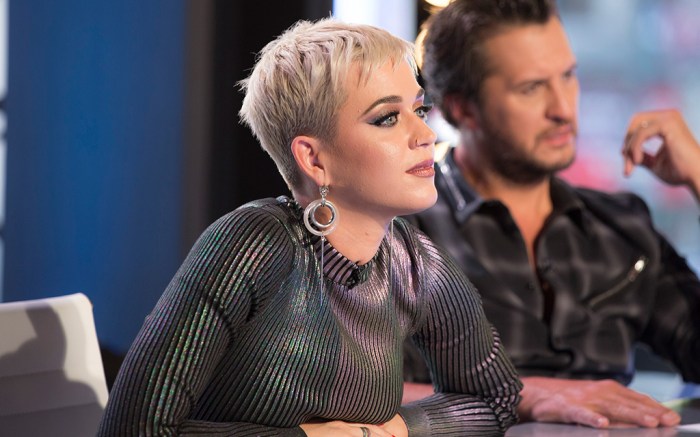 “American Idol” is back, and its star power just went up a notch with Katy Perry leading the judges table. Planked by fellow talent evaluators Lionel Richie and Luke Bryan, the pop singer gave great advice and offered a ton of entertainment — and eye-catching ensembles — during the first two episodes of the singing competition, which kicked off over the weekend.

And last night, Perry took her talents to the dance floor.

While dropping it low with one of the contestants in Los Angeles, the “Roar” singer took a small tumble.

“I’m a great dancer,” she quipped.

Wearing a sparkling spring ’18 discolike minidress by Greta Constantine, Perry took her “Idol” wardrobe to new heights but kept the shoes simple in a pair of M.Gemi patent leather stilettos. The high heels may not have the best choice for busting a move, but she recovered gracefully after the fall, with some help from Richie and Bryan to avoid a major wardrobe malfunction. Producers used an “American Idol” logo to cover up areas of Perry’s skirt.

Watch the moment below.

Perry’s onscreen ensembles can only get better from here as we patiently wait for “American Idol” live shows. Plus, it’s only a matter of time until we see her own shoe collection front and center.

“[Footwear] was a part of me that needed to be carefully created and developed, and I had to weigh a lot of my options,” Perry told Footwear News in an exclusive interview last year. “I want to learn a lot, master it and become a serious contributor in the fashion world,” she said. “[I don’t want] to be a celebrity who overindulges and takes advantage of their position.”

See how these celebs avoided wardrobe malfunctions on the red carpet.