A Look Back at Kate Middleton’s Pre-Duchess Style 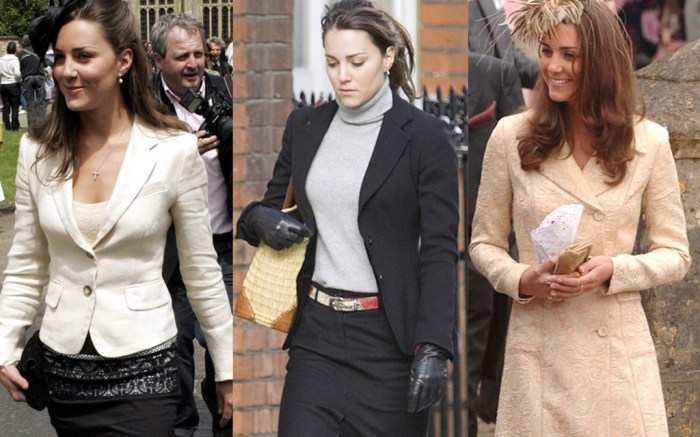 Kate Middleton may be known for her style savvy today, but back in the ’00s, she had more of an eye out for the trends than she does today.

Middleton and Prince William began dating in the early 2000s, when they were both students at the University of St. Andrews together.

In 2004, while still a student at St. Andrews, Middleton attended an event at Bleinheim Palace with the prince. She sported an olive-colored skirt with a striped blouse, completing her look with Penelope Chilvers boots. Although the duchess would be unlikely to repeat this look — the short skirt likely wouldn’t meet royal dress codes — the boots are still a closet staple of hers, which she’s worn on outdoorsy excursions around the world.

Middleton’s worn a couple other looks that wouldn’t quite pass muster today. For one, she stepped out in 2006 wearing the ultimate ’00s shoe: Ugg’s shearling boots. Middleton paired her Uggs with a pale pink cardigan and dark wash jeans — a look she would be unlikely to repeat in the ’10s.

But Middleton’s ’00s outfits include some ensembles that would work perfectly in the present. At a 2006 wedding, Middleton looked put-together in a peach-colored coatdress and nude pumps, accessorizing with a beige fascinator.

After she announced her engagement to Prince William, Middleton entirely left the trends behind, opting for more conservative styles like knee-length dresses and classic black pumps.

And at her 2011 wedding, Middleton cemented herself as a style star when she wore an elegant Alexander McQueen gown that inspired many a replica.