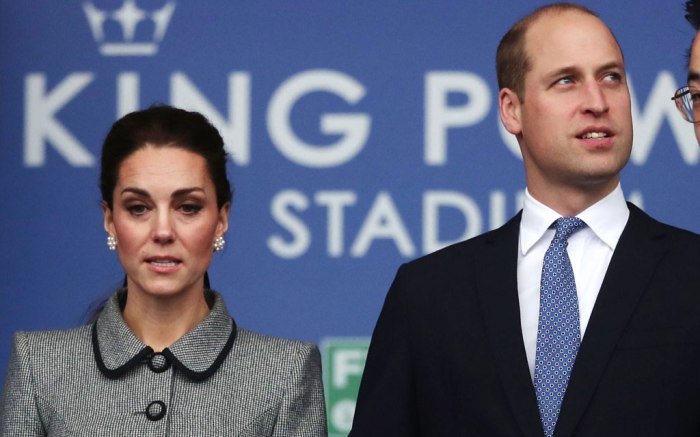 The duo attended two somber events: one at the city’s university and another at its King Power Stadium.

For the occasion, the Duchess of Cambridge wore a fitted Catherine Walker coatdress, a brand that she frequently chooses for public appearances. She battled the cold weather in a pair of black tights, completing her ensemble with a pair of black suede pumps from Tod’s.

Middleton tied her hair back into a low ponytail with a black bow.

Standing by his wife’s side, Prince William wore a dark suit with a crisp white button-down shirt and a royal blue patterned necktie.

The tragic helicopter accident, which occurred on Oct. 27, took the lives of five individuals, including Vichai Srivaddhanaprabha, chairman of Leicester’s football club.

Kensington Palace released a statement regarding the duke and duchess’ visit, stating: “Their Royal Highnesses knew the Club’s Chairman, Vichai Srivaddhanaprabha, and wanted to visit the city to recognize the warmth and compassion that the people of Leicester and fans of Leicester City Football Club have shown in reaction to the accident.”

Click through the gallery to see how Kate Middleton’s style has evolved over the years, since before she was a duchess.