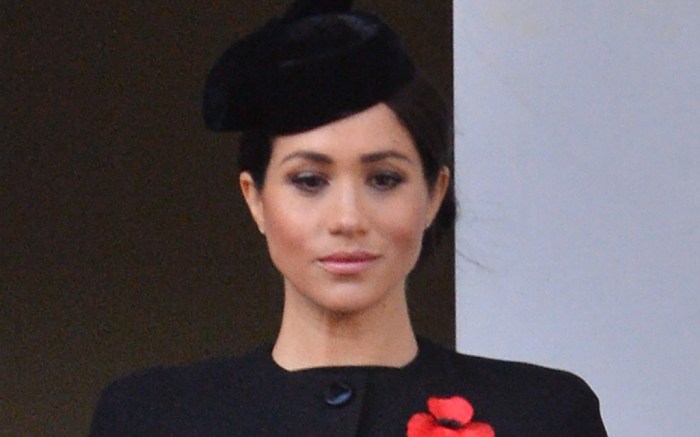 Meghan Markle attended his first Armistice Day this Sunday in London. The Duchess of Sussex joined the royal family, including Kate Middleton and Queen Elizabeth II, for Remembrance Sunday commemorations at the Cenotaph war memorial.

This year marks the 100-year anniversary of the armistice that brought an end to World War I.

All dressed appropriately for the occasion. Middleton wore an all-black coat with a white collar and fascinator as she stood side-by-side with the Queen and Camilla, Duchess of Cornwall. Each sported poppy pins to honor fallen soldiers.

Markle also wore a single poppy pinned to her black overcoat and she accessorized with a velvet hat as she was seen observing the one-minute’s moment of silence. Below both Price William and Prince Harry laid wreaths during the service as Markle and Middleton watched from separate balconies.

On Saturday, Markle’s baby bump showed in her Stella McCartney coat. She stepped out wearing Manolo Blahnik black suede pumps for the Royal British Legion Festival of Remembrance at the Royal Albert Hall in London.

FN caught up with the footwear designer just a few days before Markle’s latest appearance. Blahnik said, “Meghan has an incredible charisma, she’s sophisticated and elegant with touches of the New York girls but not so uptight. She moves well but is also pleasant and warm. And warmth and kindness are what we all need at the moment.”

Click through the gallery to see more photos of Meghan Markle’s maternity style.