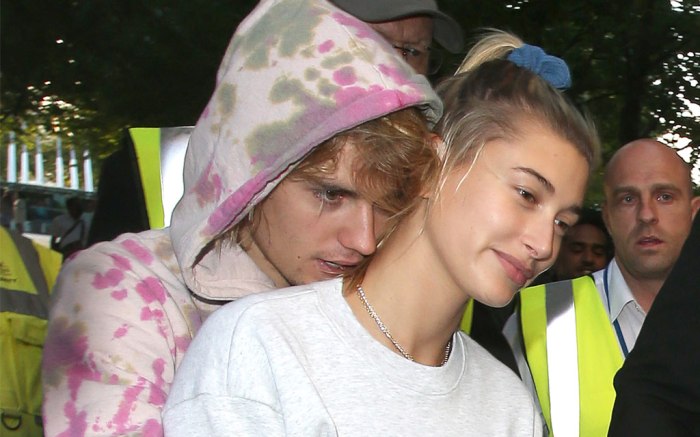 Only Hailey Baldwin can wear sweatpants and sneakers while being serenaded by Justin Bieber outside Buckingham Palace.

The model and her musician beau had both fans and passers-by whipping out their phones to snap pictures and videos of the 24-year-old crooner, who sat by the Victoria Memorial in London on Tuesday singing songs that he dedicated to his fiancée in the audience.

Accompanied by his guitar, Bieber belted out a number of tunes, such as hit single “Cold Water.”

“My girl right there is the love of my life,” he was seen saying in a clip captured by a spectator.

Baldwin was visibly enamored, smiling at the performance and even taking out her phone to capture the moment.

Despite the romantic occasion, including a stroll by the London Eye, Baldwin opted for a matching set of sweatshirt and sweatpants from Los Angeles-based indie fashion brand Cherry, paired with Vetements logo socks and all-black Adidas sneakers.

Bieber, on the other hand, had on a paint-splattered hoodie and frayed hem sweatshorts as well as Virgil Abloh’s Off-White x Nike Blazer Mid kicks.

The rumored newlyweds were said to have tied the knot less than a week ago at a New York courthouse, where they were photographed obtaining their marriage license. Shortly after the news broke, the 21-year-old took to Twitter, where she wrote, “I understand where the speculation is coming from, but I’m not married yet!”