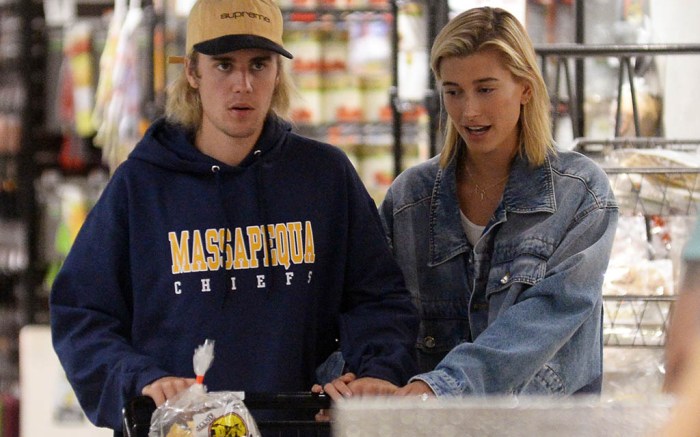 Justin Bieber and his fianceé, Hailey Baldwin, enjoyed time together today shopping for groceries at Whole Foods in New York.

The lovebirds complemented each other in streetwear looks — Bieber in a large hoodie, Supreme hat, and jeans, and Baldwin in an oversized denim jacket, white top and Gucci hiker boots.

Baldwin, a model and Adidas collaborator, had on Gucci’s mixed-material boots that featured black tech canvas, suede, and smooth leather fabrications. A padded perforated collar and durable rubber sole enhanced comfort. Other design details include a 1.75-inch heel, a large logo patch at the tongue and silvertone hardware. The shoes retail for $1,250 on Barneys.com.

The supermodel also steps out in wares from Adidas. On July 18 she announced she was tapped as an Adidas Originals style creator for its partnership with the U.K.’s JD Sports and JD Women.

On Friday, the couple took a stroll around Manhattan’s Tribeca neighborhood in coordinating styles. The pop star had on “Utility Black” Yeezy Desert Rat 500 sneakers and his bride-to-be wore Alexander Wang combat boots.

Bieber and Baldwin confirmed their engagement on July 9 on Instagram.