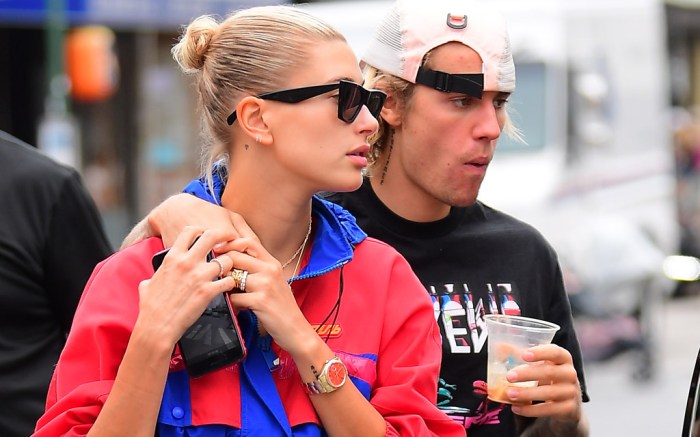 Justin Bieber might have spent a rumored half a million dollars on Hailey Baldwin’s engagement ring, but apparently the “Love Yourself” singer likes to keep things more economical when it comes to his footwear of choice.

The 24-year-old star, who revealed early this month that he popped the question, spent a warm Monday out and about with his fiancée in New York City, where he wore his usual T-shirt and shorts outfit with a pair of $35 kicks from Opening Ceremony.

A collaboration between Vans and the retailer’s Back of House team, the Move 1 Half Cab skater-style sneakers feature a round toe and lace-up front on a mid-top silhouette. The suede leather uppers, padded collar and smooth leather lining come in colors inspired by the OC tote, and the shoes also boast a classic rubber waffle sole. They went for 64 percent off on e-commerce platform Spring, where they retailed for just $34.30 before selling out.

It’s not the first time the Biebs was spotted in the vibrant kicks. In fact, just yesterday at the Hillsong Church with Baldwin, he sported the same pair with a white graphic T-shirt and baggy blue shorts — not far removed from the Supreme shirt and gray shorts he wore today in Brooklyn.

Baldwin, 21, also made a street style statement with a red and blue anorak by designer Heron Preston that was just short enough to show off her supermodel-long legs. She slipped on Adidas Continental 80 sneakers, which flaunted cool perforations, slim contrast striping and a snowy bumper sole. (The shoes go for $80 on Nordstrom.com.)