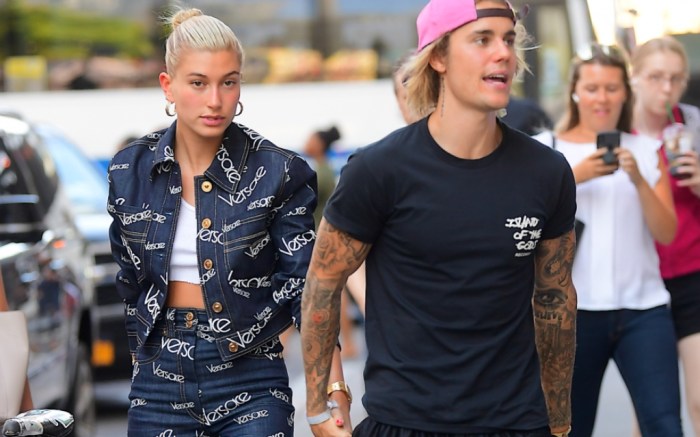 Justin Bieber made it official. After reports surfaced this weekend that he proposed to his girlfriend, Hailey Baldwin, while vacationing in the Bahamas, the pop star took to Instagram Monday to confirm the news in a lengthy post featuring two sweet black and white snapshots of the newly engaged couple.

Bieber began the post with a bang, expressing his love for the 21-year-old Tommy Hilfiger model and Adidas ambassador, writing, “Was gonna wait a while to say anything but word travels fast, listen plain and simple Hailey I am soooo in love with everything about you!”

Throughout the rest of the 24-year-old hitmaker’s statement, he speaks of his commitment to supporting Baldwin and their future family, as well as his devotion to God. Seen in the picture, his fiancée shows off the engagement ring.

Was gonna wait a while to say anything but word travels fast, listen plain and simple Hailey I am soooo in love with everything about you! So committed to spending my life getting to know every single part of you loving you patiently and kindLY. I promise to lead our family with honor and integrity letting Jesus through his Holy Spirit guide us in everything we do and every decision we make. My heart is COMPLETELY and FULLY YOURS and I will ALWAYS put you first! You are the love of my life Hailey Baldwin and I wouldn’t want to spend it with anybody else. You make me so much better and we compliment eachother so well!! Can’t wait for the best season of life yet!. It’s funny because now with you everything seems to make sense! The thing I am most excited for is that my little brother and sister get to see another healthy stable marriage and look for the same!!! Gods timing really is literally perfect, we got engaged on the seventh day of the seventh month, the number seven is the number of spiritual perfection, it’s true GOOGLE IT! Isn’t that nuts? By the way I didn’t plan that, anyways My goodness does feel good to have our future secured! WERE GONNA BE BETTER AT 70 BABY HERE WE GO! “He who finds a wife finds a good thing and obtains FAVOR from the Lord!” This is the year of favor!!!!

Despite a highly publicized on-and-off relationship with Selena Gomez through the years, which fizzled out last fall, Bieber wrote, “You are the love of my life Hailey Baldwin and I wouldn’t want to spend it with anybody else.”

He also commented that they “complement each other so well,” making us think of their cool synchronized street style.

Bieber and Baldwin are both known for their impressive sneaker collections, which feature all the most highly coveted shoes from Louis Vuitton’s Archlight to every Yeezy that has dropped to classic styles from Adidas and Nikes. We can only imagine what the couple’s conjoined shoe closet will look like once they get married and shack up.

For a look at Justin Bieber and Hailey Baldwin’s couples style, check out the gallery.