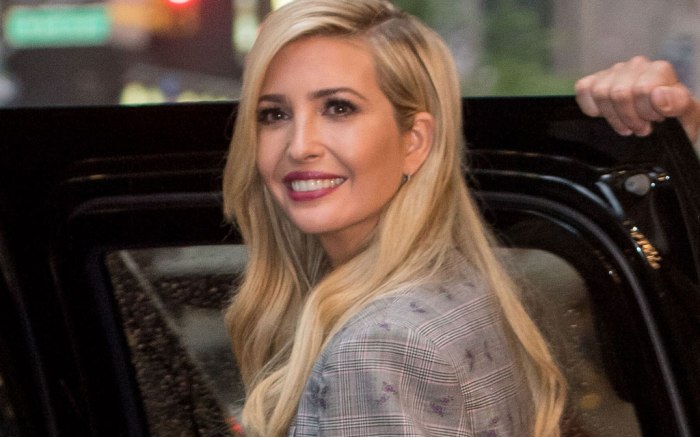 Ahead of the debate at the United Nations General Assembly, Ivanka Trump has been rubbing elbows with global leaders and former heads of state, so naturally the first daughter (and former fashion designer) dressed appropriately for the occasion.

Despite the downpour in New York City, Trump was photographed in a plaid wool-blend blazer and skirt pairing by luxury brand Altuzarra.

The two-piece power suit, which is part of the label’s fall 2018 collection, boasted modern details made feminine with florals — on a jacket with a peak lapel, three-button front and flap pockets as well as a skirt that featured a banded waist and diagonal front hem. (Combined, both pieces retail for nearly $3,000.)

For footwear, the 36-year-old slipped into a pair of classic black heels that offered both stability and sophistication. Designed by Manolo Blahnik, the BB pumps flaunted a pointed toe and topstitched collar on a leather-lined shoe with a 4-inch stiletto.

Trump also reunited with Queen Maxima of the Netherlands at the Four Seasons Hotel, where the two took part in a panel discussion for the Women Entrepreneurs Finance Initiative. At the event, Her Majesty stuck to a wine-hued ensemble composed of a coat, printed frock and matching pumps.