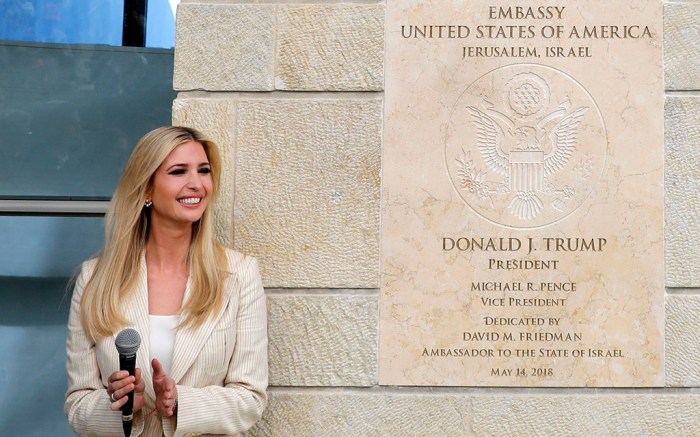 The United States officially opened its new embassy in Israel today, marking a historic occasion for the Trump administration.

At the ceremony in Jerusalem, Ivanka Trump and husband Jared Kushner were present along with other U.S. guests, who were welcomed by Israeli Prime Minister Benjamin Netanyahu.

Celebrating a pivotal moment in U.S.-Israel relations, Trump opted for a classic ensemble, throwing a pinstripe blazer over a tulle dress in a creamlike hue. She complemented the outfit with her signature pair of nude pumps.

The first daughter has been spotted wearing a similar heel in the past, from her matching moment with sister Tiffany at an Ohio rally to a spring-ready look she flaunted on a visit to Poland.

The embassy’s move from Tel Aviv fulfills a promise President Donald Trump made in December when he recognized Jerusalem as the country’s capital. “Congratulations. It’s been a long time coming,” he said in a prerecorded video.

Treasury Secretary Steven Mnuchin, who stood next to Ivanka, unveiled the seal of the U.S. embassy.

(Since the opening ceremony was underway, at least 43 people have been killed in protests at Gaza, the Palestinian territory that borders Israel. Trump’s controversial move has received praise from Israel but indignation from Palestinians.)

Click through the gallery to see more of Ivanka Trump’s best style statements of the year.

The Most Affordable Looks Ivanka Trump Wore This Year