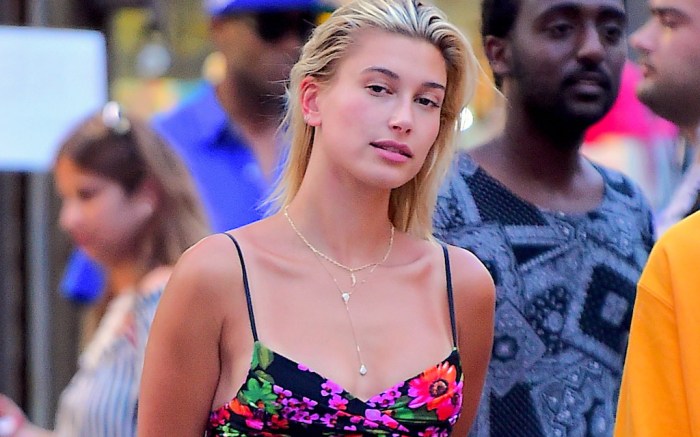 When it comes to model-off-duty outfits, there are a number of ways to achieve an effortless look — take a strappy top and trusty pair of jeans, for example, or a flirty dress that shows off one’s, well, model physique.

But when it comes to shoes, one silhouette arguably stands out as the most reliable: Adidas Stan Smiths. And yesterday in New York City, Hailey Baldwin sported exactly those, dressed in an ensemble that can be easily re-created with items you probably already have in your closet.

The newly engaged star stepped out with fiancé Justin Bieber near the city’s iconic Empire State Building, where Baldwin was photographed in a multicolored floral dress by Amen with a sweetheart neckline that accentuated her décolletage and a skirt that unevenly draped down to her knees.

The hero piece? Her white and green kicks — a classic colorway on an equally classic style, which gained popularity among fashionistas for its sleek, clean look and versatile low-cut shape. The shoes also featured the athletic giant’s signature three stripes.

Complementing his betrothed’s ensemble, the “No Brainer” singer also wore white sneakers but in a slip-on style. He threw on a gold hoodie from LeBron James’ men’s streetwear brand, Unknwn, and blue track pants with yellow and red stripes running down the sides.

Bieber proposed to Baldwin in July, and their latest outing comes amid speculation that the couple adopted a four-legged companion. The model took to Instagram Stories yesterday to share images and video clips of a husky puppy along with a caption that read “baby love.”

Click through the gallery for Hailey Baldwin and Justin Bieber’s couple’s style.