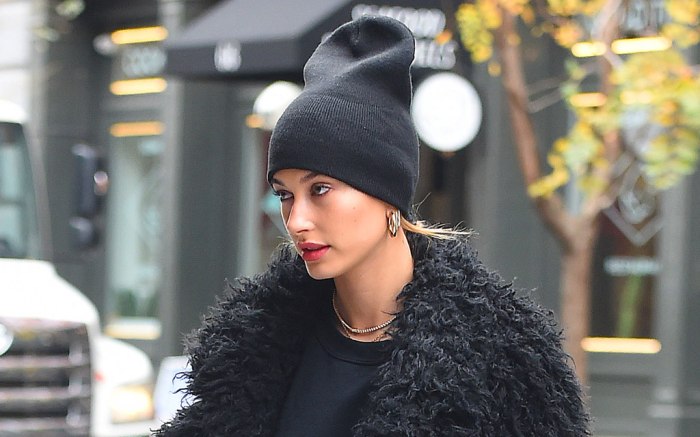 The 21-year-old stepped out in the city while clad in a giant black teddy coat that went all the way down to her calves. The coat was left open to reveal a black crewneck sweatshirt and a pair of shiny pants.

For footwear, the model selected black combat boots with thick laces. The matte book provided a stylish contrast to her shiny pants and textured jacket.

FN’s 2017 Style Influencer of the Year accessorized her look with a large beanie that covered her blond locks and a series of thick gold-colored hoop earrings.

While Baldwin’s been spending much of her time on the West Coast with Justin Bieber in recent weeks, she appears to have made the jaunt to New York solo, as she’s yet to be spotted with the performer.

Meanwhile, the “Sorry” singer added fuel to the rumors that he and his love had married with an Instagram caption on a photo of the pair, which racked up more than 6 million likes.

My wife is awesome

Hailey Baldwin Blinds Us in the Sparkliest Pantsuit (and No Shirt)