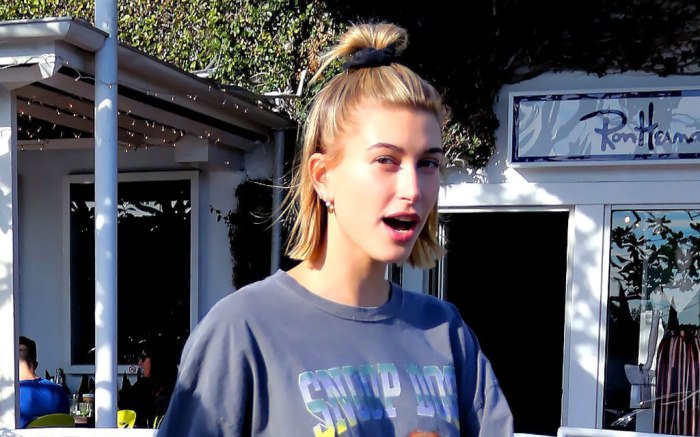 When it comes to street style, Hailey Baldwin knows how to make even the most casual outfits pop.

The 22-year-old model stepped out in an oversized Snoop Dogg T-shirt and cozy yellow sweatpants as she went shopping in Los Angeles yesterday.

The T-shirt featured multiple images of the “Gin and Juice” rapper with his name emblazoned in all caps. The pale yellow sweats were from Cotton Citizen and worn rolled up at the ankles.

While Baldwin often opts for Adidas sneakers, she completed her casual outfit yesterday with a designer pair of kicks. The 2017 FN Style Influencer of the Year sported Chloe high-top sneakers in an all-white colorway that she’s worn once before. The $730 sneakers feature ’90s-inspired buckle-straps and futuristic split soles. They are made of white leather and have a 1.5 inch sole.

The star wore her blond hair in a half-up, half-down style, using a scrunchie to keep it in place.

Although the “Drop the Mic” host is frequently spotted alongside husband Justin Bieber, she went shopping sans the “No Brainer” singer yesterday.

Baldwin did more shopping on Wednesday, stepping out in a mostly blue look alongside stylish Maeve Reilly. The New York native wore an oversized blue blazer with a pair of fitted jeans for the outing. She completed her look with Yeezy boots that laced up and featured a stiletto heel.