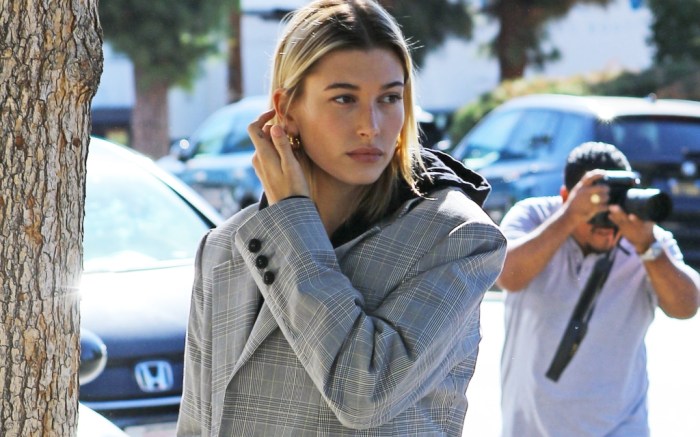 Hailey Baldwin and Justin Bieber were spotted on another coffee run at Joan’s on Third in Los Angeles on Tuesday, and while the outing was typical, Baldwin’s outfit was anything but.

The Adidas ambassador wore an attention-grabbing look that included an oversized gray plaid blazer with a black hooded sweatshirt underneath and a matching micro miniskirt, which showed off plenty of her long, tan legs.

Baldwin completed her chic ensemble with a gold anklet and a black leather Chanel Double-C top-handle bag with a shoulder strap and a boxlike shape.

The Tommy Hilfiger model was accompanied by her newly minted husband, Justin Bieber, who dressed in a casual black hoodie over a white tank teamed with blue and white Nike basketball shorts, a black hat and gray Nike high-top sneakers.

For more of Hailey Baldwin and Justin Bieber’s couples street style, check out the gallery.