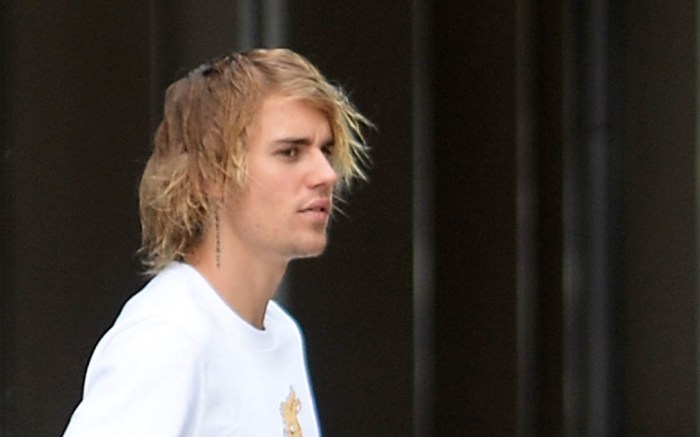 Before popping the question, Justin Bieber and Hailey Baldwin started off as church buddies. So it’s only fitting that the lovebirds made a big appearance together as an engaged couple on Sunday at Hillsong Church in New York.

The celeb-fave church is known to attract stars in fuss-free casual style, and it was no different today when Bieber and Baldwin arrived.

The pop star had on a white graphic tee with baggy blue and green shorts completed by mid-top sneakers. The kicks were designed with blue and red colorways on a chunky, white midsole. His messy hair added some edge to the ensemble.

Meanwhile, his fiancée left her usual streetwear at home and decided on a casual-chic look. The Adidas collaborator rocked a striped silver and purple top with high-waisted white trousers, white sneakers and a Louis Vuitton backpack.

On July 18 she announced she was tapped as an Adidas Originals style creator for its partnership with the U.K.’s JD Sports and JD Women.

Baldwin also expresses her faith in ink. Kyle Jenner designed a tattoo for her, done by artist JonBoy (who has inked Bieber), that reads “pray” when her hands are touching each other — “PR” on one index finger and “AY” on the other.

Baldwin also has a cross on her neck and around 17 other tattoos.