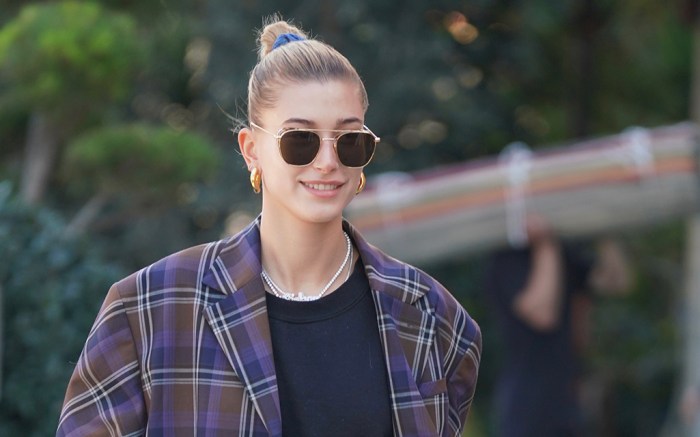 Hailey Bieber was spotted at a stylish lunch meeting in Los Angeles last week where she was the latest celebrity to join the power–dressing movement in a chic oversized suit. The newlywed — who tied the knot with Justin Bieber last month — took a modern approach to the look, opting to complete her outfit with a pair of casual sneakers instead of traditional heels.

Baldwin’s suit featured a purple and brown plaid pattern, and she chose to layer it with black crewneck sweatshirt. As for her footwear, the 22-year-old (who celebrated her birthday a few weeks ago) gave her usual Adidas sneakers a break and instead sported Acne Studios Steffey low-top trainers in white leather.

The minimalist shoe boasted velcro closures, a chunky contrasting midsole and the brand’s signature emoji icon on the heels. For those wishing to mimic the model’s style, the sneakers are available to purchase for $380.

The model joins a string of celebrities who are embracing power dressing. Last week, actress Olivia Wilde took the trend to sultry territory by using lacy lingerie as a top. In October, Lady Gaga stepped out in a Marc Jacobs ensemble for the Elle Women in Hollywood event, where she revealed during her speech that it was the perfect choice after sifting through a number of dresses.

J. Lo and A-Rod Twin in Checks for Date Night