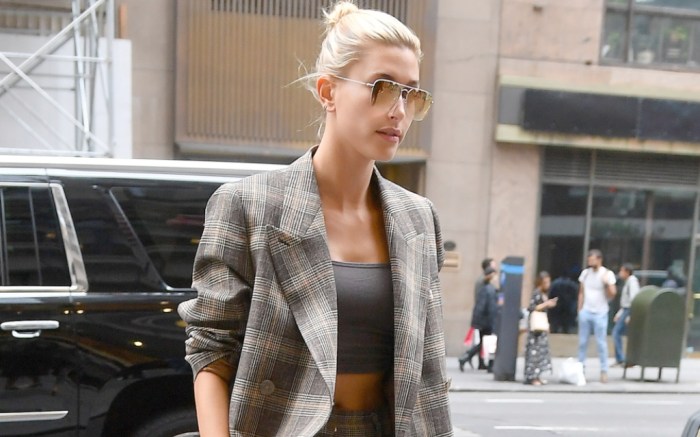 New York Fashion Week has barely just begun but already, Hailey Baldwin is serving up head-turning looks on the streets of the Big Apple.

The 21-year-old model was spotted out Friday rocking a brown plaid menswear-inspired suit featuring an oversize blazer and cropped trousers paired with nude Alexander Wang Caden fishnet heels. The pointed style, which the designer debuted on the runway for spring 2018 last year, is priced at nearly $1,000 and is constructed out of suede and leather. They also feature a “satin bra strap” elastic slingback strap, a clear PVC toe box and a leather pin heel.

The sock-like silhouette is similar to what Baldwin sported the night prior for the John Elliott spring ’19 runway show, which she attended alongside fiancé Justin Bieber. The Adidas ambassador had worn strappy clear sandals teamed with nude socks for the presentation, which also brought out star athletes like LeBron James, Kevin Love and Victor Cruz.

Baldwin further accessorized her look with brown-tinted aviator sunglasses and a watch.

For more of Hailey Baldwin’s head-turning street style looks, check out the gallery.