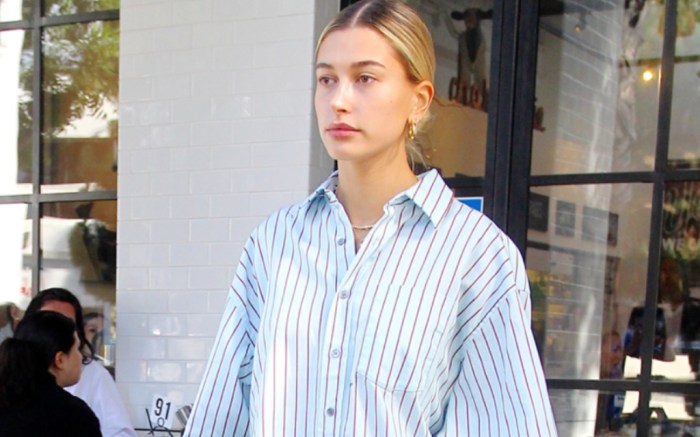 Hailey Baldwin and Justin Bieber made a stylish appearance yesterday for breakfast at Joan’s on Third in Los Angeles’ Studio City neighborhood. Both showed off their individual style for the outing, with Bieber sporting an athleisure look complete with affordable footwear while his bride-to-be stepped out in shoes straight from the runway for the current season.

The 21-year-old model commanded attention in an oversized light blue and red striped twill cotton shirt by Acne Studios teamed with chunky House of Holland boots as the couple left the L.A. eatery. The suede-trimmed hiking boots featuring a macramé strap are from the label’s fall ’18 collection and were made in collaboration with British footwear label Grenson.

The lace-up style paired perfectly with her $350 shirt, which was inspired by ’90s dads, notably the character of Uncle Phil from “The Fresh Prince of Bel-Air.” Baldwin pulled things together with a black leather Fendi Peekaboo bag.

Meanwhile, the “No Brainer” hitmaker donned a low-key outfit that included a gray hoodie over a white tank with gray Adidas sweatpants and classic $50 black and white checkerboard Vans slip-ons.

For more of Hailey Baldwin and Justin Bieber’s couples style through the years, check out the gallery.