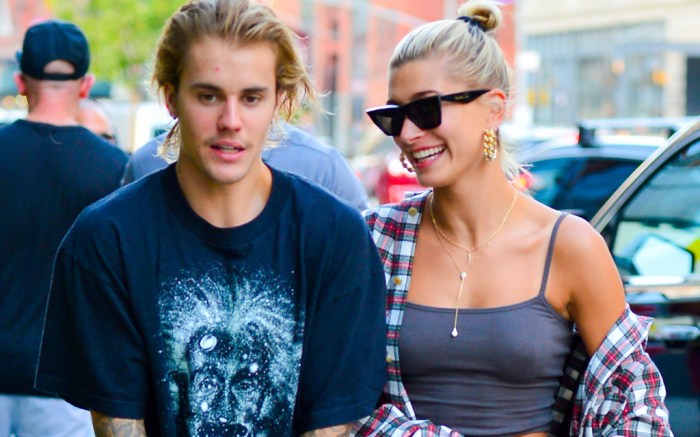 Hailey Baldwin is no stranger to sartorial extravagance, even as she performs the most mundane activities.

The model has been spotted in $1,250 Gucci hiker boots during a Whole Foods grocery shopping trip and $850 Alexander Wang combat laceups for a Tribeca stroll. Now the style in question happened to be Louis Vuitton’s retro-futuristic dad shoes at a jaw-dropping $1,090 as she patiently waited on Justin Bieber’s hair appointment.

The 21-year-old accompanied her fiancé at New York’s Cutler Salon, where the “No Brainer” singer got a slight trim for his growing mane. For the casual occasion, Baldwin opted for the luxury fashion brand’s Archlight sneakers, which feature an oversized tongue and bouncy wavelike outsole in a minimalistic cool black and white colorway. Despite its dad shoe status, the kicks add a feminine touch with a low-cut shape around the ankle.

As she continued her sneaker streak, the blonde beauty kept the rest of her outfit simple, with an oversized plaid cover-up loosely worn over a cropped gray tank and high-waisted dark-washed jeans. Bieber, on the other hand, sported a loose black shirt with an Albert Einstein print, Air Jordan shorts and — in a comical contrast to Baldwin’s footwear choice — cozy hotel slippers.

It seemed a happy outing for the newly engaged couple, who were photographed all smiles a day after both appeared visibly upset during a Manhattan bike ride and café stop. The reason behind their emotional episode remains unclear.

Baldwin and Bieber got engaged last month, with the 24-year-old artist confirming the news in a sappy Instagram post. “Hailey I am soooo in love with everything about you!” he wrote. “So committed to spending my life getting to know every single part of you.”

Click through the gallery to see more of Hailey Baldwin and Justin Bieber’s couple’s style.