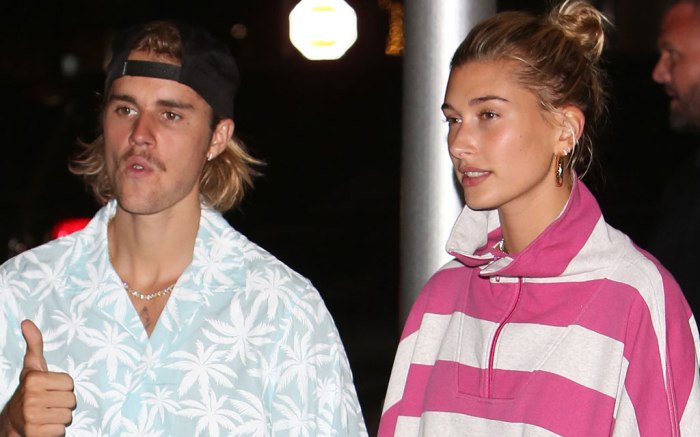 Yes, you read that right.

Justin Bieber and Hailey Baldwin took an eccentric approach to their usual streetwear style last night in Beverly Hills, Calif., where the newly engaged couple was spotted heading to snazzy Mastro’s Steakhouse in distinct outfits that are making their own headlines.

The 21-year-old model, for one, looked to be inspired by fictional cartoon character Waldo, who is recognized for his red and white striped shirt in the “Where’s Waldo” book series. However, her take involved a pink and off-white striped anorak, which she wore pantless to put her long, tanned legs on display.

Separately, her fiancé went full tourist-in-Hawaii mode, dressed in a palm tree-adorned shirt, backward cap and chain necklace — complete with a mustache. But even more eye-opening was his unzipped fly (on date night, no less!), which Bieber didn’t seem to mind as he continued to give paparazzi the thumbs up.

The only complementary part about the couple’s ensembles? Their shoes. Matching in black and white lace-ups, Baldwin opted for Versace’s combat boots, lined by the brand’s signature Medusa head medallions, while Bieber wore Vans’ classic canvas style, with its low-top profile and original waffle outsole.