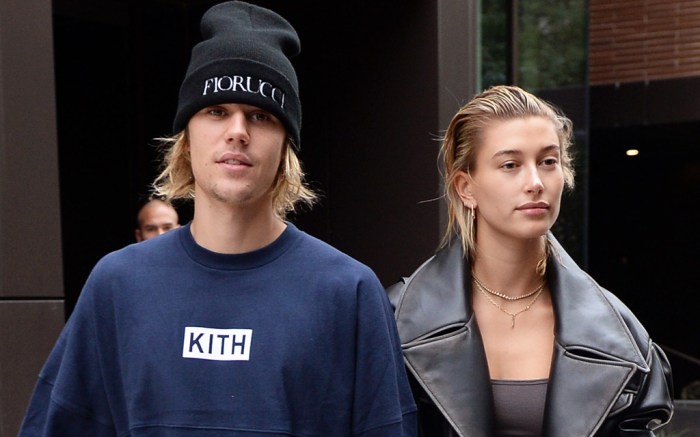 The duo stepped out for a date in New York yesterday in coordinated, low-key looks. Baldwin sported a pair of teensy denim shorts with a tank top and an oversized leather jacket. For footwear, the 21-year-old selected Adidas Continental 80 sneakers — a style that has become a wardrobe staple of her street style in recent months.

As for Bieber, the “No Brainer” singer kept things comfortable in a long-sleeved Kith T-shirt, cozy bottoms and black Vans sneakers. The 24-year-old accessorized with a black beanie.

The pair looked very much in sync as they showed off their casual style.

Baldwin and Bieber got engaged two months ago — and fans began speculating yesterday that the duo had already married after images emerged of them going to a courthouse to pick up their marriage license.

But Baldwin wanted to dispel rumors that she and her beau were married, taking to Twitter to write, “I understand where the speculation is coming from, but I’m not married yet!”

While the pair have spent the majority of the summer in New York, Baldwin is bound for London, where she will show a ’90s-inspired Falcon fashion show on Monday for Adidas x JD Sports.

Click through the gallery to see Justin Bieber and Hailey Baldwin’s couple style.