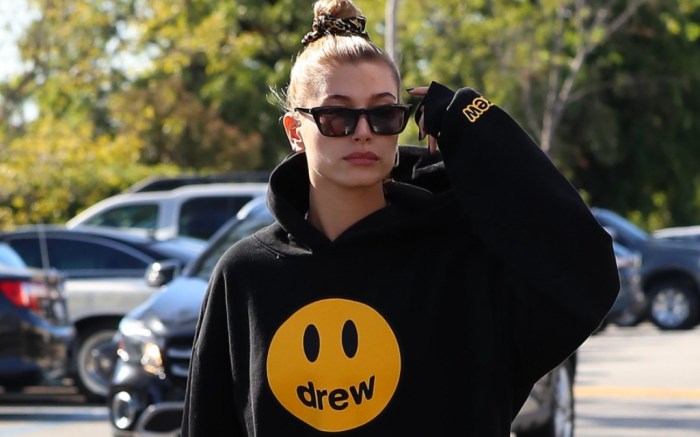 Hailey Baldwin channeled Kim Kardashian today as she stepped out for a workout class wearing her husband’s new clothing line.

The runners, which The Weeknd was seen wearing in all black recently, come with a caged upper and are layered with high-performance elements taken from hiking and running gear. The Track, which also comes in an orange and blue colorway as well as green and navy, retails for $895.

The high-tech fashion sneaker, which dropped in the U.S. on Sept. 24, was designed by artistic director Demna Gvasalia and debuted on the runway at the luxury house’s fall ’18 presentation in March.

The Adidas ambassador, who celebrated her birthday on Thanksgiving, rounded out her look by adding shades and a leopard-print scrunchie.

Baldwin was later seen meeting up with her husband, who rocked Adidas sneakers with a Raiders bomber jacket and colorful patchwork sweatpants.

Check out the gallery for more of Hailey Baldwin’s street style.