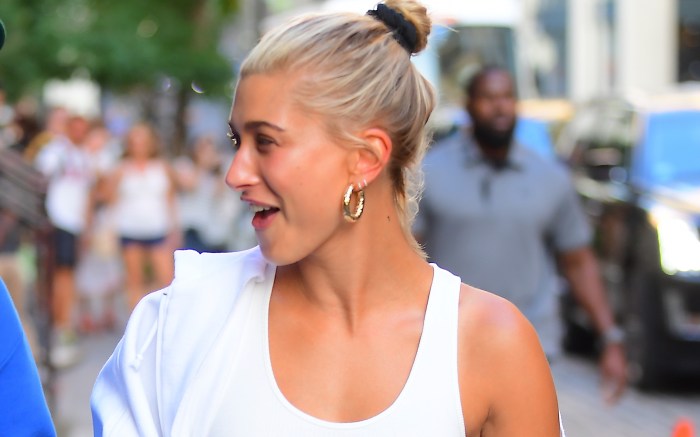 Whether or not you support their coupling, it’s clear that Hailey Baldwin and Justin Bieber serve up serious complementary styles that prove their relationship might just be a sartorial match made in heaven.

Case in point: The newly engaged pair’s date night in Brooklyn. On their way to exclusive member’s-only club Dumbo House, the 21-year-old model and her fiancé were spotted in matching athleisure ensembles — her in black and white, him in black and blue.

Baldwin opted for a top-and-bottom co-ord set courtesy of T by Alexander Wang, which consisted of a racerback sports bra and leather bike shorts, over which she draped a lightweight oversize hoodie. For footwear, she went with a pair of stark white sneakers that kept her look sporty yet chic.

Her 24-year-old beau, on the other hand, chose an ensemble in contrasting color, with a cobalt blue Thrasher hoodie and matching socks, as well as dark track-striped joggers and chunky dad shoes.

It also marked the public debut of Baldwin’s oval-shaped diamond, which the model has worn since Bieber popped the question during their romantic Bahamas vacation. (He reportedly dropped half a million on the diamond.)

“You are the love of my life Hailey Baldwin and I wouldn’t want to spend it with anybody else,” the pop star wrote in an Instagram post officially announcing their engagement.