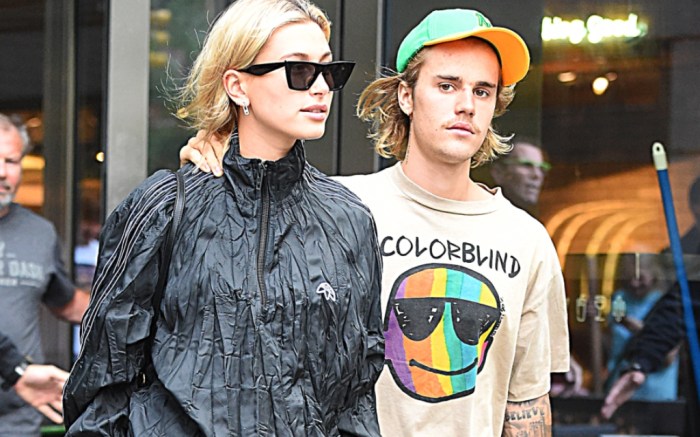 One of the best things about Justin Bieber and Hailey Baldwin’s style as a couple is that it’s effortless. They don’t have to try too hard with each other. That was put on display Monday when the engaged pair hit the streets of the Big Apple for a date that included Shake Shack and a movie.

The lovebirds walked hand in hand as they made their way through the city’s busy streets looking casual yet fashionable, with Bieber rocking his beloved checkered slip-on Vans in red and white. Baldwin’s wore bright red Vetemets x Reebok socks, which served as the only pop of color in her all-black athleisure look. She also matched her fiancé’s sneaks.

The jacket is from Wang’s third and latest collab with the German sportswear company. She paired it with skintight black yoga leggings and chunky white Adidas Falcon sneakers gifted to her by Kylie Jenner. She further accessorized with black tinted Celine Edge sunglasses and a ’90s-inspired Miu Miu leather-trimmed velvet mini–backpack retailing for $1,360.

Meanwhile, the “Love Yourself” hitmaker styled his favorite $50 kicks with blue and lavender multicolored socks and drawstring gym shorts teamed with a tan rainbow smiley face graphic tee featuring the word “colorblind” across the chest. He topped off his relaxed outfit with a green and yellow baseball cap.

Check more of Justin Bieber and Hailey Baldwin’s couples style through the years.