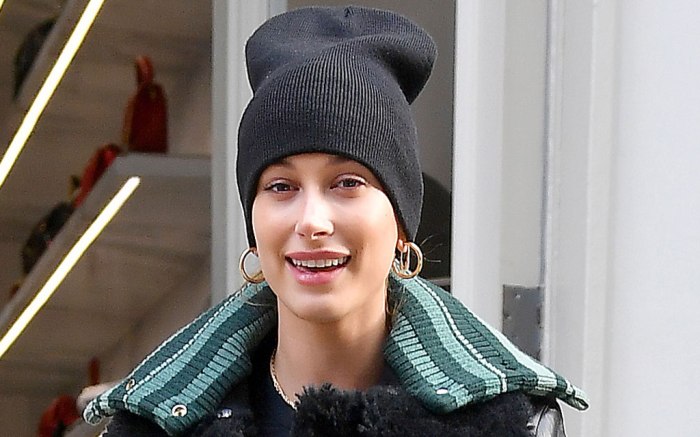 Hailey Baldwin went for an elevated take on the athleisure trend as she was spotted outside a Saint Laurent store in New York yesterday.

The 21-year-old wore a fitted black T-shirt and shiny leggings with sheer paneling that flattered her toned legs. To battle the elements, the “Drop the Mic” host wore a leathery black jacket with furry green detailing.

The 2017 FN Style Influencer of the Year kept the look casual with her shoes, choosing Adidas Originals Yung-1 sneakers. The all-black kicks are designed as a fresh take on the ’90s Falcon Dorf sneaker and retail for $120.

The model accessorized with chunky gold earrings and a goofy, oversized black beanie.

While running errands earlier yesterday, the Bare Minerals ambassador stepped out in a different look. She looked stylish in an all-black ensemble, battling the elements in a giant teddy coat that she wore over a T-shirt, a pair of fitted shiny pants and combat boots. The playful black beanie made it into the earlier look as well.

While Baldwin has been spending a lot of time with new husband Justin Bieber in recent months, she appears to have made this New York trip solo. The star has worked continuously throughout this time, appearing in PrettyLittleThing’s holiday campaign and continuing her “Drop the Mic” hosting duties.