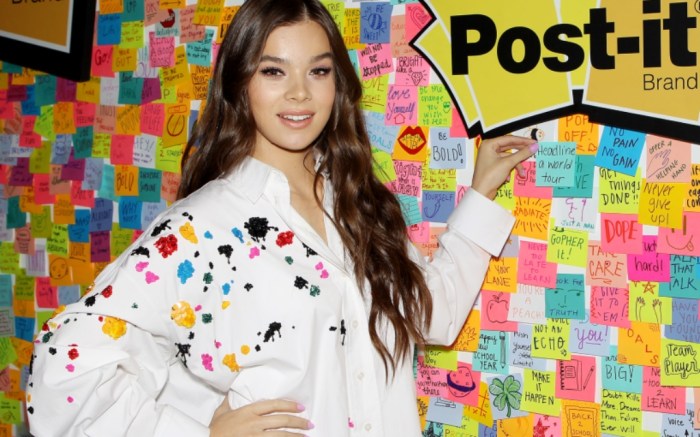 Hailee Steinfeld wore an outfit to complement the colorful Post-Its behind her on Monday in NYC during a photo call for the sticky note brand, which was founded more than 40 years ago.

The 21-year-old songstress — who will soon embark on the American leg of Katy Perry’s “Witness” tour along with Charlie Puth — showed off a pantless look featuring paint splatters. Later, she gave an acoustic performance for attendees at the event, which focused on inspiring kids to stick to their dreams.

Steinfeld donned an oversized white men’s dress shirt boasting vibrant specks of color, and she added a pair of pointy-toed pumps by Aquazzura with a white leather finish and sexy, curvy ankle-straps that flattered her feet.

For her performance, the “Pitch Perfect 3” actress changed into a shimmering purple strapless jumpsuit by Roberto Cavalli paired with pointy light purple stilettos.

This comes a week after the “Starving” singer was spotted making a rare appearance with her rumored boyfriend, former One Direction member Niall Horan, on the streets of the Big Apple. The couple was last spotted out and about in Los Angeles in May.