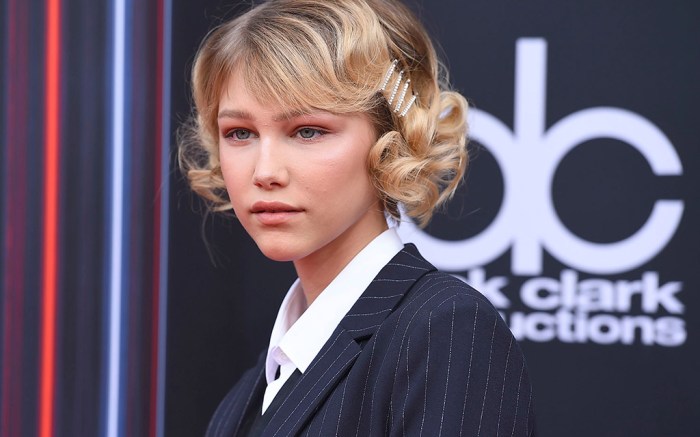 Now that’s how you rock a power suit.

Ever the cool girl, Grace VanderWaal opted for an androgynous spin on the power suit. Styled by Elkin, the singer-songwriter wore a pinstripe blazer from Hugo Boss’ Boss womenswear collection over a pristine white collared shirt, which she tucked into matching pinstripe trousers that fell just above the ankle.

The cut allowed VanderWaal to show off a pair of sparkly embellished socks with metallic peep-toe platform sandals. She completed the look with a tie that was loosely draped around her neck.

The 14-year-old, ukelele-strumming talent has made a name for herself in the music industry with distinctive vocals and her unique performance style. Her career began through YouTube, where the young starlet posted original songs and covers — some of which she was able to perform on stage at NBC’s “America’s Got Talent,” a competition that she won at just 12 years old.

Since then, the pop star has released a full-length album titled “Just the Beginning,” amassed a loyal following of 2.6 million fans on Instagram and received the 2017 Billboard Women in Music Rising Star Award.

VanderWaal will be presenting at the ceremony, which will broadcast live at 8 p.m. ET on NBC from the MGM Grand Garden Arena in Las Vegas.