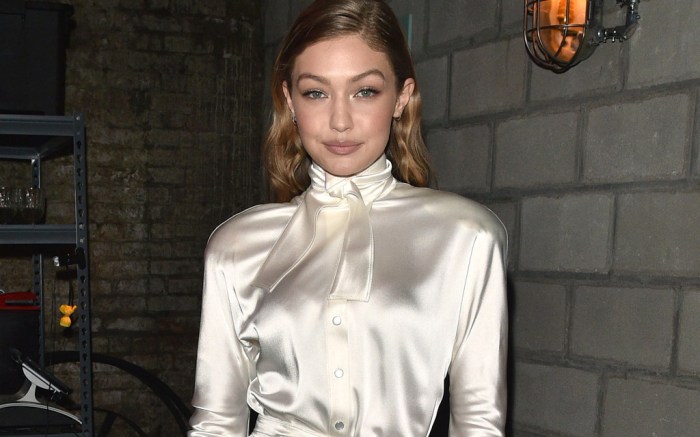 She’s already a Victoria’s Secret angel, but Gigi Hadid’s latest sartorial appearance had the supermodel looking like a real-life celestial being.

Last night, the 23-year-old beauty attended a launch event in New York for “Backstage Secrets: A Decade Behind the Scenes at the Victoria’s Secret Fashion Show,” a collection of the angels’ most candid moments captured by photographer Russell James.

Although familiar names like Josephine Skriver and Ming Xi were present, Hadid commanded serious attention in a sophisticated silk creation by Andreas Kronthaler for Vivienne Westwood Spring ’19 Bridal, which she paired with Olgana Paris pumps in crushed velvet and a timeless silhouette.

The shoes, which rise up 4 inches, featured an asymmetrical vamp and a slingback strap, all in a shade that perfectly complemented her silver-cream monochromatic look. Her dress, on the other hand, boasted a high neckline, buttoned down the front and tightly cinched at the waist.

The model was joined by James as well as her Victoria’s Secret family for a photo op.

Gigi Hadid Reunited With Zayn Malik, & These Were the Animal Print Booties She Wore