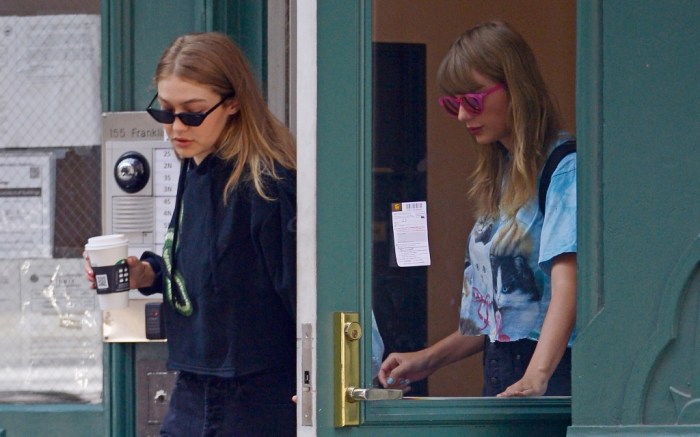 A rare sighting: Formerly inseparable BFFs Gigi Hadid and Taylor Swift have been spotted together for the first time in almost two years.

Yesterday, the Reebok ambassador and the pop star were seen exiting the latter’s Tribeca apartment in New York along with model Martha Hunt and the Haim sister trio — and it’s got us wondering whether the squad is officially back together.

Swift’s absence in the public eye has been noted since Kim Kardashian’s “Famous” takedown (no pun intended) nearly two years ago, and along with her disappearance came the dissolution of her A-list group of friends, including Selena Gomez, Karlie Kloss and Ruby Rose.

However, it appears the squad might be getting back together — sartorially, at the very least. The elder Hadid was pictured wearing a serpent-adorned sweatshirt straight from Swift’s merch line for her latest musical project, “Reputation,” while the “Look What You Made Me Do” hitmaker sported a blue T-shirt printed with a litter of adorable kittens.

The two kept their aesthetics in line, opting for dark-colored bottoms — Hadid in high-waist jeans cuffed at the ankle and Swift in button-up cutoffs — as well as their own takes on the dad shoe trend. The 23-year-old supermodel slipped on her Ash trainers in its multiwhite hue, while her 28-year-old gal pal chose a hot-pink and teal pair.

Stay tuned to find out what this new reunion means for the Swift squad.