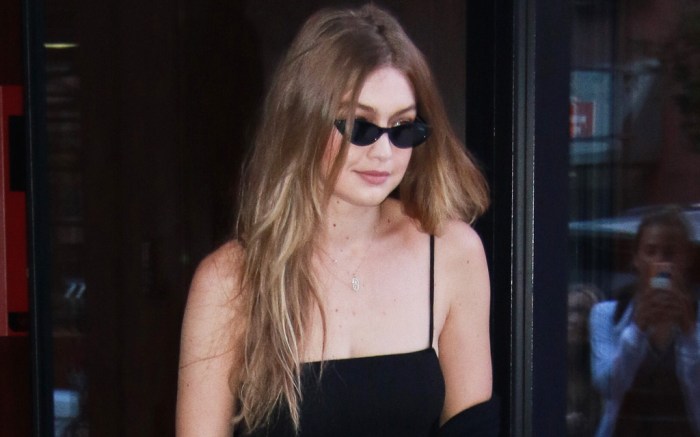 Gigi Hadid went for an all-black look as she stepped out to Taylor Swift’s concert at MetLife Stadium in East Rutherford, N.J., on Friday.

The 23-year-old sported a tank top with spaghetti straps, ripped jeans that flared at the ankles and sunnies from her collaborative collection with Vogue Eyewear.

For footwear, Hadid wore Western boots — a trend that has been seen everywhere from city sidewalks to high-fashion runways this season. Hadid’s black leathery boots featured a chunky heel and square toe, with shiny curlicue detailing. Celebrities aplenty have been spotted in the trend, including Hadid herself, who rocked Western boots with leggings and a distressed jean jacket on Wednesday.

Although Swift seems to prefer thigh-highs to cowboy boots these days, the “Ready For It?” singer has worn her fair share of Western-inspired boots, having started out as a country singer before transitioning to pop. Hadid’s boots may have been her way of paying tribute to her pal.

The supermodel accessorized with a python-print belt — perhaps another tribute to Swift, whose “Reputation” merchandise prominently features a snake motif.

While Hadid opted for a sleek, all-black look yesterday, she does not shy away from bold colors. On Thursday night, the Reebok ambassador stepped out in a dramatic, canary yellow crop top with billowing sleeves, which she paired with flare jeans and trendy Jacquemus sandals with sculptural heels.

Over the years, Hadid has sported every color of the rainbow — and worn a variety of shoe styles, ranging from ’90s-inspired sneakers to sky-high pumps.