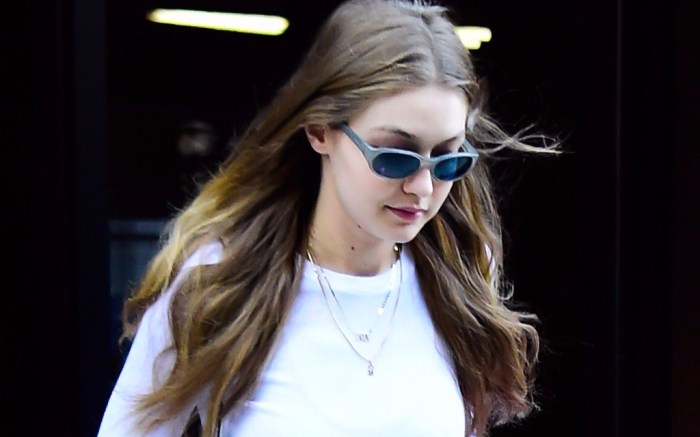 Labor Day may have come and gone, but Gigi Hadid is still wearing white.

The model stepped out for a Starbucks run in New York City yesterday while clad in a white long-sleeved T-shirt and pink and white striped Frame jeans that were cropped at the shin to reveal her shoes.

For footwear, the 23-year-old selected a pair of Vetements x Reebok sock trainers that retail for $840. The white knit tube-sock-like sneakers featured black stripes and a red Vetements logo at the ankle. At the toe, the shoes read “right” and “left” in royal blue.

A Reebok brand ambassador, Hadid frequently steps out in styles from the athleticwear giant.

Hadid wore her dirty blond locks down and accessorized with a pair of gray sunglasses and a white Prada handbag.

The supermodel made headlines yesterday with an Instagram post explaining that she could be getting sued for posting a picture of herself. The image had been taken by a paparazzo outside of the Vogue Forces of Fashion Panel last week.

In the post, Hadid railed against the photographers who line up outside her house and said she “would have been happy to tag and give credit” to the person who’d taken the image. She also spoke out against taking fan accounts down, writing, “Having their fan accounts get shut down (when you don’t know what the fan community means to them) is just wrong.”

Click through the gallery to see more of Gigi Hadid’s best street style.