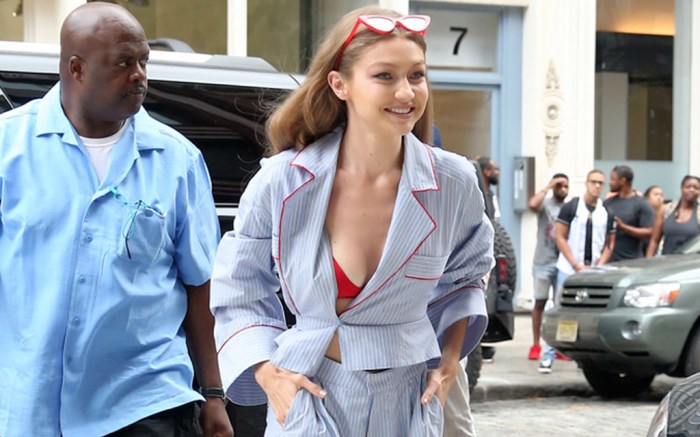 Any time Reebok and Stuart Weitzman brand ambassador Gigi Hadid steps out of her apartment, there are sure to be dozens of paparazzi waiting to capture her every outfit. Hadid has become a street style icon, with each look she wears showing up instantaneously on every fashion site (ours included).

The model has definitely earned her ranking as a top style inspiration, though, and we have some of our favorite Gigi Hadid outfits for evidence.

Here we have Gigi in Paris looking like a piece of art from the Louvre. Wearing Gianvito Rossi PVC heels and an Andreas Kronthaler For Vivienne Westwood set, she was surely one of the best dressed at the Vogue party.

It’s not always fancy parties that Hadid is dressing for, though. Sometimes she is just running errands or going to dinner with her singer beau Zayn Malik.

In an outing in New York, the famous sister covered her Fleur du Mal bra with a Christian Dada pajama-esque, striped outfit, Le Specs red sunglasses and white boots from one of her most beloved brands, Stuart Weitzman.

The nicest part about Gigi’s street style? Her mix-ins of affordable pieces. Check out this pairing of Adidas slides (only cost $30) with a customized jacket from The Mighty Company. The jeans are Seven For All Mankind in another price effective twist.

She adds a supermodel paycheck touch to the outfit, though, with her Versace purse and choker.

See all of the 41 outfits here.