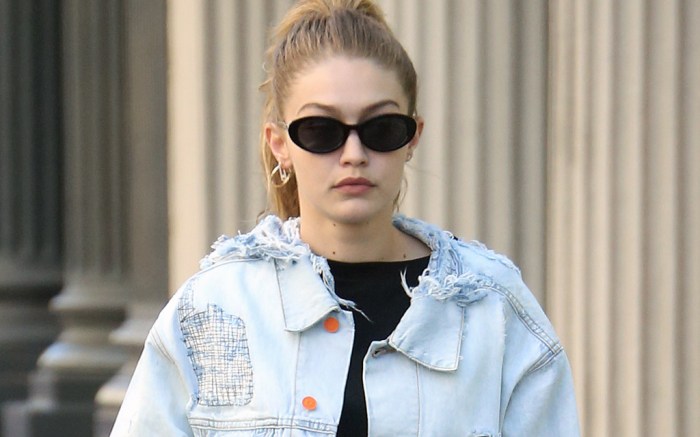 Gigi Hadid is no stranger to keeping up with the latest fashion trends.

Two days after she was spotted in her latest footwear favorite (the chunky white sneaker, no less), the model stepped out in New York City wearing another major style statement seen on everything from city sidewalks to runways this season: the Western boot.

Her pair, which featured a patent upper swathed in a veganlike leather, came in a sleek black color that boasted Western-inspired detailing at the toe and an etched buckle at the ankle. Western boots have been spotted in pre-fall and fall ’18 collections, and they continue to be one of the resort ’19 season‘s most coveted shoe trends.

The 23-year-old beauty and Reebok ambassador kept the rest of her off-duty outfit cool-girl casual, wearing an all-black ensemble in the form of a cropped tee and above-the-ankle-length stretch yoga pants that complemented the booties.

She also threw on a thoroughly distressed cropped jacket in a light denim wash and finished off with accessories including a scarlet red mini handbag as well as a pair of oval frame sunglasses.

Hadid was photographed on her way to boyfriend Zayn Malik’s place. She and the former One Direction star rekindled their relationship this summer after a brief breakup.